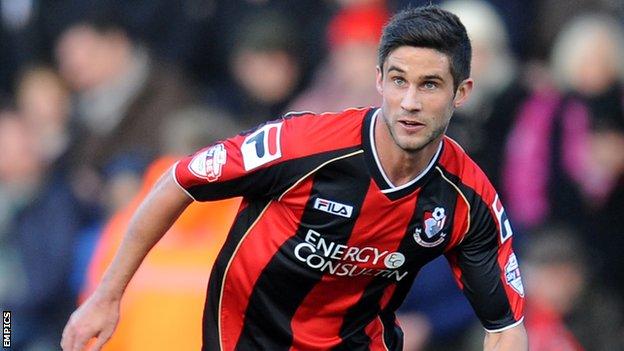 Bournemouth manager Eddie Howe says they are yet to open talks with Norwich, about the possible permanent signing of midfielder Andrew Surman.

Surman, 27, still has a year left to run on his contract with the Canaries - who have just appointed Neil Adams as their new boss.

Surman played 39 times in 2013-14 for the Cherries, helping them to a record 10th-place finish in the Championship.

"He is Norwich's player now so it is out of our hands what happens with his future. It is very much in the hands of his club and we respect that.

Surman set for third bite with the Cherries?

Surman previously spent five months on loan at Bournemouth, from Southampton, at the start of the 2005-06 season.

During his stay, he scored six goals in 28 games.

Surman failed to find the back of the net in his season-long loan in 2013-14.

"We were very grateful to Norwich for giving him to us for a year and in the first place so we will certainly see what happens with him. We value him very highly."

When asked if the club had begun talks with Norwich over a permanent move, Howe replied: "No".

Howe admits the club will have to be patient in their pursuit of summer recruits as they bolster their squad ahead of the new season.

"We know the type of players we are looking for," Howe added.

"We are pretty well organised on that front but it may be that we have to be patient with a few of them."

Meanwhile, the Cherries have had no further approaches for top scorer Lewis Grabban.

Cardiff City had a bid accepted earlier this month but have since signed Adam Le Fondre from Reading and former Manchester United forward Federico Macheda.