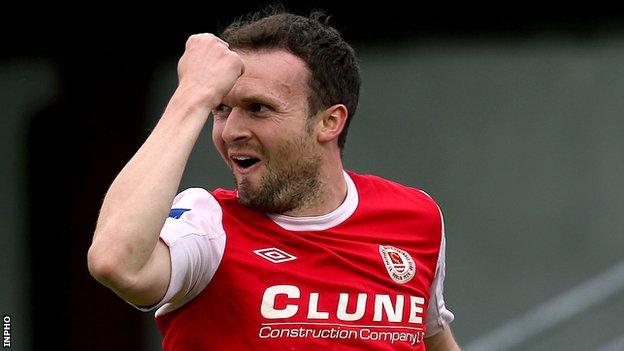 Fagan put Pat's ahead on 13 minutes after great work by Chris Forrester and the striker doubled the lead on 19.

Michael Duffy and Rory Patterson pulled back Derry goals on either side of Fagan completing his hat-trick.

After the match, Derry midfielder Barry Molloy described the team's first-half display as "not good enough" and apologised to the club's supporters.

"From one to 11, we weren't good enough in the first half. That first half was one of the worst displays in my time at this club," added Molloy.

It was difficult to disagree with Molloy's assessment after a dismal Derry performance.

After the criticism levelled at the defensive mindset of previous manager Roddy Collins, Peter Hutton's formation appeared to go to the other extreme as St Pat's midfield and attack were able to run unhindered in the first half.

Winger Chris Forrester was doing much of the damage early on and it was he who cut inside to set up Fagan's opening goal on 13 minutes.

The Pat's lead was doubled six minutes later as Derry were guilty of trying to play pretty football in their own half only to gift the ball to Keith Fahey, who squared for Fagan to bundle the ball over the line despite Ryan McBride's efforts.

Three minutes later, Byrne was able to rise unchallenged to head St Pat's third goal after the sloppy concession of a free-kick.

Derry did attempt to rally before the break as Pat's keeper Brendan Clarke saved efforts from Barry McNamee and Patrick McEleney in quick succession.

However, the game was definitely over three minutes after the resumption as Hoare headed a Killian Brennan free-kick past Gerard Doherty.

Duffy pulled a goal back on 60 minutes with an emphatic finish but the margin was back to four on 70 as Fagan completed his hat-trick after an attempted clearance by Derry keeper Doherty.

Rory Patterson notched a second Derry goal on 83 but it was scant consolation for the well beaten Candystripes.