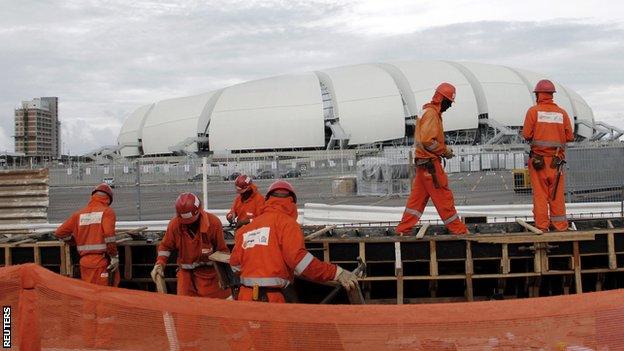 Fifa general secretary Jerome Valcke is concerned over the readiness of three stadiums scheduled to host games at the World Cup, which begins on 12 June.

Valcke has expressed his fears over preparations in Natal, Porto Alegre and Sao Paulo, venue for the opening game between Brazil and Croatia.

He tweeted that Natal's Arena das Dunas was in a "race against the clock".

"We need full commitment from all parties in Natal to ensure all will be in place and tested," Valcke added.

Valcke also said that organisers at the Arena Fonte Nova in Salvador had "no time to waste" ahead of their first group game, a re-run of the 2010 final between Spain and the Netherlands on 13 June.

"All must be perfect that day," Valcke cautioned.

Fifa also want another test event to take place in Sao Paulo's Itaquerao stadium following a series of problems during the first match to be played there earlier this month.

A Brazilian league game is due to be held there this Sunday, but reports suggest it will be held in front of a reduced capacity crowd. Three workers have been killed during the construction of the stadium within the last year.

In March, Porto Alegre's local mayor said the city could drop out if additional funding was not found to build facilities for media, sponsors and fans. Its Beira Rio stadium, which will have five matches at the Fifa World Cup, hosted a test event between Internacional and Penarol of Uruguay in April.

Fifa vice-president Jim Boyce said that the tournament would begin on schedule, and that those Brazilians who have protested about it taking place in their country should realise that they will benefit in the long term.

"I have absolutely no doubt that the World Cup will start on time," Boyce told BBC Radio 5live.

"I don't think these protests should be taking place during the World Cup because when you look at the legacy that will be left for people in Brazil, I think that they have to realise there will be a considerable amount of money put back from the World Cup into their country and their infrastructure."

However Ronaldo, who scored both goals in the final when Brazil won the Fifa World Cup in 2002, says he feels "embarrassed" about the state of the country's infrastructure around the forthcoming tournament.

"My embarrassment is on behalf of the population that really expected these large investments - airport reforms, urban mobility, everything that was promised and not delivered," declared the former Barcelona, Inter Milan, Real Madrid and AC Milan striker, who is a is a member of the Local Organizing Committee for the Fifa World Cup.

"I think we're missing an opportunity. A series of investments were promised that won't be delivered. Only 30% percent will be delivered."