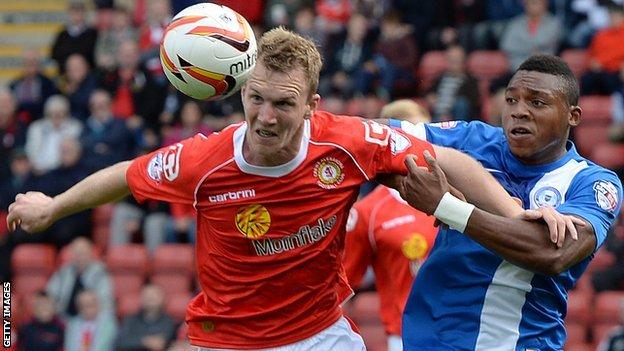 Ellis, 25, was a free agent after not being offered a new contract at Gresty Road, and has now agreed a two-year deal with the League Two-bound Shrews.

"It's nice as I'd set myself a deadline to get something sorted and it's come a lot sooner, so that's pleasing," Ellis told BBC Radio Shropshire.

"I had to look elsewhere and there's no better place than Shrewsbury."

After starting his career as a trainee at Bolton, Ellis got his first taste of first-team football during a four-year stay with Torquay, whom he signed for permanently in July 2008 after a seven-month loan spell.

He joined the Alex in the summer of 2012 and has played a key role in the club's last two League One campaigns.

"It was disappointing to leave a good club and I would've stayed if I was offered something, but that wasn't the case," Ellis admitted.

Although Ellis is stepping down a division for next season following Town's relegation, it was not enough to dissuade him from coming to Greenhous Meadow.

"You might say it's a backward step but the club want to come straight back up and I want to be playing in League One," he said.

Ellis joins Ashley Vincent and Nathaniel Knight-Percival as boss Micky Mellon gets to work shaping Town's new-look squad ahead of 2014-15.

"We're going to have to gel as a team with the new players coming in but, hopefully, we can do that," Ellis said.

"I've not spoken to Mickey but I know what they want to do and where they want to go and I'm more than happy with that."