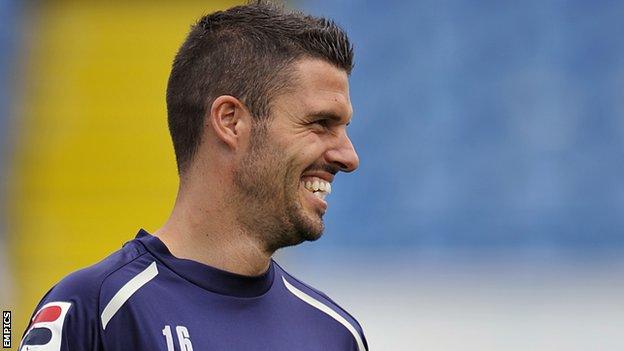 Barrow manager Darren Edmondson has said securing a deal for out-of-contract striker Lewis Guy could be helped by personal circumstances.

The Penrith-born forward, 28, was released by Carlisle this summer but is keen to remain in Cumbria after spells at Doncaster, MK Dons and St Mirren.

Edmondson told BBC Radio Cumbria: "He's been away from Cumbria for a long time but children come into the equation.

"I think they're settled up here now and that's a big advantage for us."

Bluebirds boss Edmondson has also expressed an interest in Andy Cook, a forward released by Grimsby this summer.

Cook, 23, is no stranger to Holker Street, having made 74 league appearances and scored 19 goals for the now Conference North club in three separate spells.

He also played under the current Barrow boss during a loan stint at Cumbrian rivals Workington AFC.

Dallas-based businessman Paul Casson's takeover of the Bluebirds will give Edmondson funds to strengthen the squad in a bid to return to the Conference Premier.