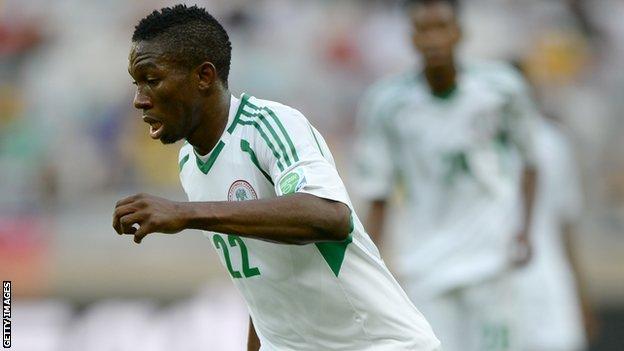 Chelsea defender Kenneth Omeruo is determined to break into the first team after signing a new two-year deal that keeps him at the club until 2018.

The 20-year-old Nigeria international has largely been loaned out by Chelsea since he joined in January 2012.

Omeruo, who is part of the Super Eagles World Cup squad, told BBC Sport: "I've been working towards a new contract and I am really happy it is done.

"I'm very confident and I know I have to prove myself more to get a chance."

After signing for the Blues from Standard Liege, Omeruo was immediately sent on a season-long loan to Dutch side ADO Den Haag.

In his first game for ADO Den Haag he scored a goal, an own goal and received a red card - something that had never happened before in the Dutch league

He is yet to make his Chelsea debut and spent the second half of last season on loan at Middlesbrough in the Championship, where he made 14 appearances.

However, Omeruo remains positive about his chances at the London club and is aware of what he needs to do to convince manager Jose Mourinho to play him.

"Going to the World Cup is an opportunity to show myself and prove that I am ready to play in the first-team," Omeruo said.

"I'm enjoying myself here in England and settling down to the football.

"I just need to take the opportunities when presented to me, stay focused, do my best and show the manager what I'm capable of doing."

Omeruo was a key member of the Nigerian side that won the Africa Cup of Nations in 2013.

He also played in last summer's Confederations Cup in Brazil.