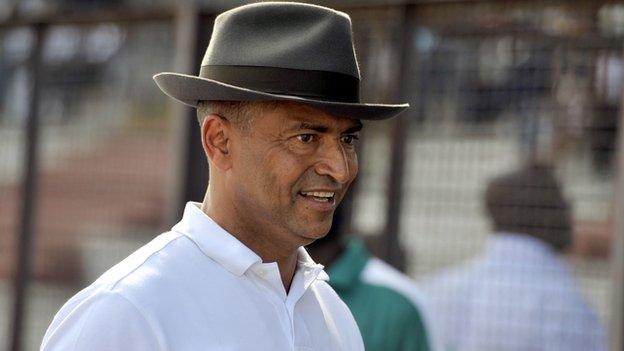 The 27-year-old has been given a five-year contract after impressing Mazembe during a one-week trial from Platinum Stars of Zimbabwe.

"Mazembe is a big team and we want all the best players across the continent to come here," he told BBC Sport.

"If there are better players even in Europe, they are free to come here."

Mazembe are four-time winners of the Champions League are in the quarter-finals of this year's competition, grouped alongside compatriots AS Vita, Zamalek of Egypt and Sudanese giants Al-Hilal.

Sadiki was a member of the Zimbabwe team that this year reached the semi-final of the African Nations Championship.

Meanwhile, Zambia international midfielder Nathan Sinkala may not return to Mazembe following the end of his loan spell with French side Sochaux.

Katumbi revealed there "are a lot of offers" for the 23-year-old, who joined Sochaux in January and had stated his desire to remain with the club.

However, following Sochaux's relegation from Ligue 1 he may be looking elsewhere, with FC Basel of Switzerland and French side Evian believed to be interested in him.

"It's up to him if he wants to stay in Europe or come back here," Katumbi said.

"It will be good if he gets a permanent contract in Europe for Zambian football as well."

Sinkala has since returned to Zambia to link up with the Chipolopolo who next Saturday play Japan in a friendly in the United States.