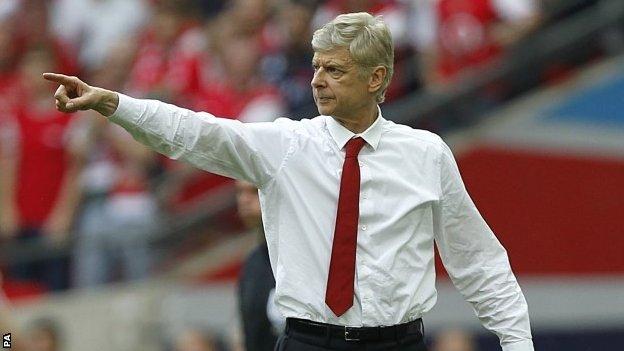 Wenger has led Arsenal to eight major trophies since arriving in September 1996 and will now stay until 2017.

The 64-year-old has just guided the Gunners to a 17th consecutive Champions League qualification and ended a nine-year wait for silverware with victory over Hull in the FA Cup final.

"We are entering an exciting period. We have a strong squad, financial stability and huge support," he said.

"The club has always shown faith in me and I'm very grateful for that.

"We have gone through fantastic periods and also periods where we have had to stick together. Every time when that togetherness was tested I got the right response.

"I think I have shown some loyalty as well towards this club and hopefully we can make some more history. I am sure we can."

The Frenchman's previous contract was set to expire this summer.

Arsenal had not lifted a major domestic trophy since 2005 prior to the recent FA Cup triumph, although they did reach the Champions League final in 2006.

During Wenger's time at the club, Arsenal moved to the new Emirates Stadium close to their old ground at Highbury.

Wenger, who became the longest-serving manager in England when Sir Alex Ferguson retired from Manchester United in May 2013, is credited with bringing new ideas about sports science and nutrition to English football.

"This is a guy who works 24 hours a day all year around," former Arsenal goalkeeper Bob Wilson told BBC Radio 5 live.

"He hates to lose. He totally revolutionised all sorts of things in the game in this country. People tend to think he has too much power, (but) a guy who dedicates himself to the game in the manner that he does is someone you treasure."

Wenger has not enjoyed the easiest of seasons, and a 6-0 thrashing by Chelsea in March during his 1,000th game in charge led to suggestions this season could be his last at the club.

"He has established Arsenal for its exciting playing style around the world, continues his commitment to young players and has the ability to bring top-class players to the club."

With the FA Cup back in Arsenal's trophy room once more and the winning feeling back at the club, along with Champions League football again, Wenger's commitment to the future became a formality.

His greatest achievement was when his 'Invincibles' remained unbeaten in winning the 2003-04 Premier League.

Arsenal have not won the title since, and, despite being in contention for much of this season following the club record signing of Mesut Ozil for £42.4m, they faded to finish fourth for the sixth time in nine years.

"The fact Arsenal has competed at the top of the game in England and Europe throughout the time Arsene has been manager is the ultimate testimony to his consistency of performance, talent and ambition.

"We are delighted with the FA Cup success which has added to his already outstanding record. Under his guidance, we look forward to adding more trophies."