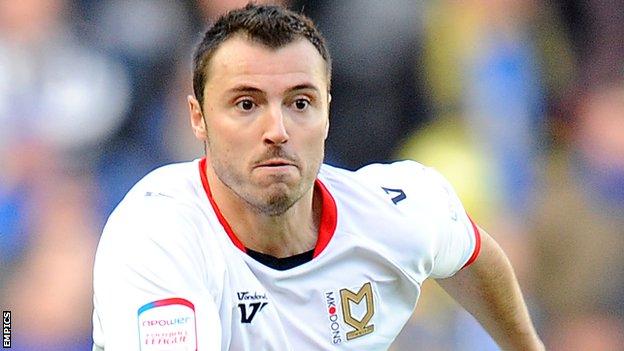 Defender Antony Kay will remain at MK Dons after signing a new one-year contract with the League One club.

Despite undergoing surgery for a hip problem last season, which saw him sidelined for 12 weeks, the centre-back made 34 appearances and scored twice.

"Towards the end of last season a new contract was mentioned and I knew then, definitely, that I wanted to stop here," Kay, 31, told the club website.

"I've really enjoyed the last two years and I just wanted to continue that on."

The former Huddersfield defender played an important part in helping MK Dons finish in 10th in the table, with the Dons keeping eight clean sheets when Kay was in the side.

Manager Karl Robinson highlighted Kay's desire to come back stronger following his injury as a key reason for his impressive form.

Robinson said: "Losing him to injury last season was a big loss, but he worked hard to get back fit and ended the campaign as one of the most important players.

"He has a strong desire to play for the club and I look forward to working with him for another 12 months."