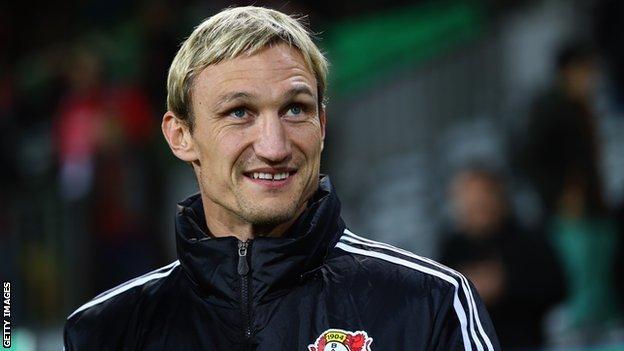 Brighton have appointed ex-Liverpool defender Sami Hyypia as their new manager on a three-year contract.

Hyypia takes over from Oscar Garcia, who resigned as Seagulls head coach following the defeat by Derby in the Championship play-off semi-finals.

The ex-Finland international, 40, was sacked by German Bundesliga side Bayer Leverkusen in April.

"Brighton are an ambitious club and I am very pleased to have been given this opportunity," Hyypia said.

"I have looked at the club from top to bottom and I am very impressed by what I've seen at all levels."

Hyypia retired from from playing in 2011 at the age of 37 after spending the majority of his career at Liverpool.

During his time at Anfield, he won the Champions League in 2005, and was also part of the team who secured a historic FA Cup, League Cup and Uefa Cup treble in 2001.

After leaving England, he was appointed joint manager, along with Sascha Lewandowski, at Leverkusen and helped guide them to third and a place in the Champions League.

The Finn took sole charge of Leverkusen in May 2013 but was sacked 11 months later following a run of one win in 12 matches.

This will be Hyypia's first managerial role in England and he has been impressed with the Championship side's facilities.

"I've seen the Amex Stadium and the club's new training ground and they are among the best I've seen anywhere in the world," said Hyypia.

"I've also already met some of the key staff including [assistant manager] Nathan Jones, the club's head of football David Burke, and Dr Helge Riepenhoff, head of medical and sports science, and I am looking forward to working with them."