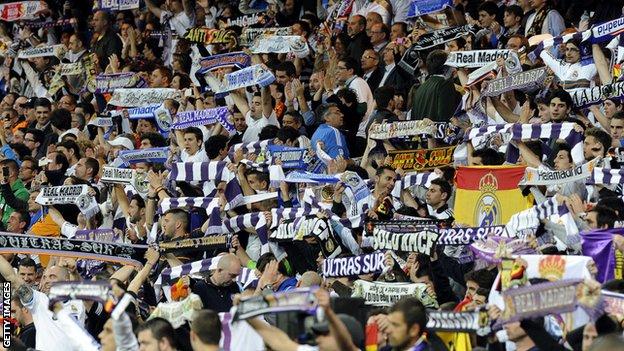 Real Madrid have been ordered to close part of their Bernabeu stadium during their next European match as punishment for racist behaviour by fans.

The Spanish club were charged following the home leg of their Champions League semi-final against German opponents Bayern Munich in April.

European governing body Uefa ruled Real must shut two sections of the 81,000-seater stadium in their next tie.

"The fight against racism is a high priority," read a Uefa statement.

"Uefa has a zero-tolerance policy towards racism and discrimination, both on the pitch and in the stands."

The newly-crowned European champions must also put banners bearing Uefa's 'No to Racism' slogan in the closed sections.

The sanction comes after a number of racist incidents involving supporters of Spanish clubs recently.

Last month, Barcelona defender Dani Alves was the target of a racist taunt at Villarreal when a home fan threw a banana on to the pitch next to him.

Levante's Senegal midfielder Papakouly Diop complained of racist abuse from a section of the Atletico Madrid supporters a week later.