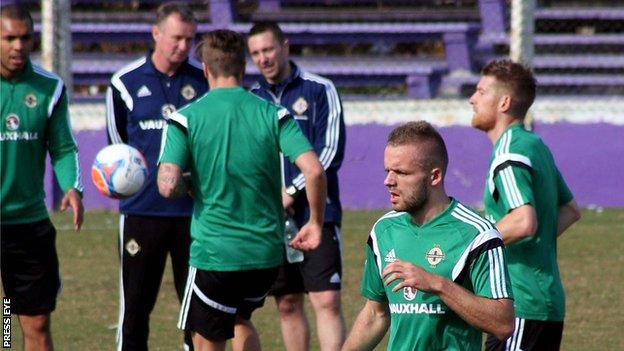 Liverpool's Ryan McLaughlin is set to be only uncapped player in Northern Ireland's starting line-up against Uruguay even though Michael O'Neill's resources have been severely stretched.

A host of regulars are missing the game in the early hours of Saturday morning because of injuries and other reasons.

One squad member, Fulham youngster Liam Donnelly, 18, has yet to play a senior competitive match for his club.

But experienced Aaron Hughes, Steven Davis and Chris Baird should all start.

Niall McGinn, Sammy Clingan and Daniel Lafferty are also all available to O'Neill but the absence of Kyle Lafferty and Martin Paterson could mean a rare international start for Inverness striker Billy McKay.

"I'd like to have more experience out here than I do have but we have the likes of Steven Davis, Chris Baird, Roy Carroll in the spine of the team and then we have the opportunity to introduce some of the younger players," said O'Neill.

"It's about getting the balance right. The younger ones might come in without too much fear but you have to be fair to them.

"You don't want to put them in when it's too much for them and they dread coming in to play again.

"But we're not in a position really to protect the players from that, we have to put them in."

Those who will hope to get out on to the pitch at the Estadio Centenario in Montevideo include New York Red Bulls midfielder Jonny Steele and Cliftonville striker Liam Boyce, who was a late call-up to the squad along with Accrington Stanley's uncapped James Gray.

The numbers available to O'Neill are unlikely to be vastly increased any time soon and he admits some of the untried players on duty this week could be needed in Euro 2016 qualifying.

"The ones who are here are in a pool of players where the next generation of international players will come from," he explained.

"So while they're very young they're not that far from being involved. As we go into the first qualifier against Hungary in September it's not beyond the realms of possibility that some of these younger players will be needed."