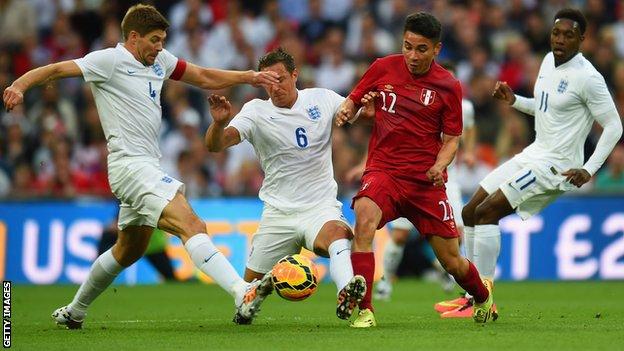 England captain Steven Gerrard is confident the team will peak for their World Cup opener against Italy on 14 June after a workmanlike win over Peru.

A fine strike from Daniel Sturridge was followed by goals from Gary Cahill and Phil Jagielka as England ran out 3-0 victors in their final home friendly.

"The important thing is we are ready to peak in 10 days' time," said Gerrard. "Against Italy we'll be raring to go.

"Hopefully we'll give a top performance and I am confident we can do that."

England face the side that knocked them out of Euro 2012 in the hot and humid conditions of Manaus, in northern Brazil, on 14 June.

And they have been attempting to replicate that environment during their training camp in Portugal over the last week.

Manager Roy Hodgson said the performance against Peru, who are 42nd in Fifa's rankings, was a "perfect send-off to a perfect two weeks".

But he admitted: "We could have been a bit sharper in our passing tempo in the first half."

Wayne Rooney played his first game in a month after a groin injury and was substituted after 65 minutes.

Hodgson said he was pleased with the Manchester United striker's sharpness as he works his way back to full fitness.

The England boss said: "I don't have any fears in that respect. His attitude and commitment are first-class, even in a game of this nature. He has two more weeks to keep that going.

"I was happy with his performance, and I have no need to consider, at this moment in time, which strikers I will play against Italy in two weeks' time.

"I'm very pleased with the options I've got in my strike force, and I now have two weeks of training and matches to decide the line-up. I won't decide the line-up until the last week or even the last day before the game in Manaus."

Liverpool striker Sturridge, who has scored 27 goals in 37 games for club and country this season, said his fourth England goal was "definitely" his best.

The 24-year-old said: "It was difficult because Peru defended well, they were very compact.

"We have worked very hard in the week and there wasn't the match sharpness we would have liked.

"We don't want to make up the numbers [in Brazil], we are winners. That doesn't mean we will win the World Cup but we are winners and we will do our best."

The 66-year-old explained the team had a clean bill of health, despite left-back Leighton Baines appearing to pull up with a calf injury at Wembley.

"It was caution on our part," Hodgson added of the decision to substitute Baines. "He could have continued but the game was over. It was an opportunity to give [Everton defender] John Stones 10 minutes in front of 85,000 fans at Wembley."