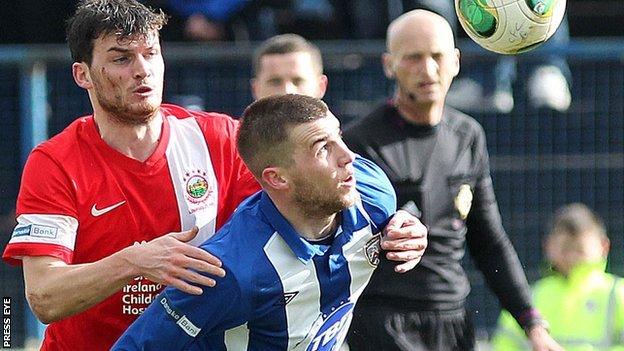 The 27-year-old has joined the Blues in a two-year deal after passing a medical on Saturday.

His younger brother Philip made his Linfield exit on Thursday, with the midfielder joining Derry City.

Meanwhile, James Knowles has returned to Premiership champions Cliftonville after he was released by new Linfield boss Warren Feeney earlier this month.

The midfielder moved from Solitude to Windsor Park last summer and his brief stay included a loan spell with relegated Ards.

Stephen Lowry was a target for Linfield last year but after talks with then Blues boss David Jeffrey he decided to remain at the Showgrounds.

"I'm delighted - it's a big move for me, joining one of the biggest clubs in Ireland," Lowry told the club website.

"I've faith in my ability and I just hope I can hit the ground running.

"It's a shame Philip and I couldn't play in the same team together with Linfield."