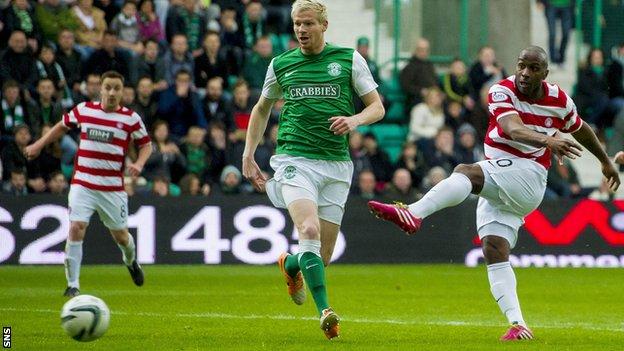 Striker Jason Scotland has agreed terms on a new deal with Hamilton Academical, as they prepare for a return to Scotland's top flight.

The 35-year-old played a key role as Accies beat Hibernian in the Premiership play-off final.

Scotland scored the opener and then set up Tony Andreu's crucial goal as Hamilton won 2-0 at Easter Road for a 2-2 draw on aggregate.

He also netted in the penalty shootout as Accies secured promotion.

Former Trinidad and Tobago forward Scotland signed for Hamilton in January after being freed by Barnsley.

He joined Dundee United in 2003 and had a spell at St Johnstone before moving south, where he had stints with Swansea, Wigan and Ipswich.

Skipper Martin Canning and midfielder Jon Routledge recently signed new deals with Hamilton, and Andreu, Louis Longridge, Michael Devlin and Ziggy Gordon have already been tied up for next season.