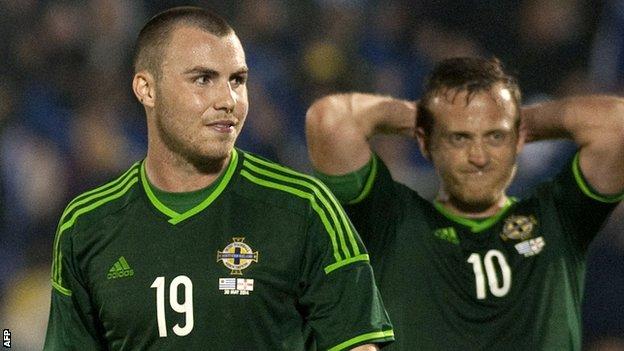 Just a few months ago the 20-year-old from Portadown was playing in the Doncaster Rovers reserve team alongside One Direction pop star Louis Tomlinson.

But in Montevideo McCullough starred as O'Neill's men went down narrowly 1-0.

"To play the way he did against a striker like Cavani who is valued at £60m plus was fantastic," said O'Neill.

"There were others who came in and did well like Ryan McLaughlin and Paul Paton.

"Obviously we were disappointed to let the goal in. At half-time, when it was 0-0, we were starting to think about maybe nicking a win.

Uruguay are capable of getting to the last 16, and if they do that I do not think they will fear anyone

"We had a couple of half chances towards the end of the game, but we were just not able to capitalise on a lot of the good play that we had."

With Northern Ireland missing a string of regulars for the trip to South America, McCullough was one of a number of inexperienced youngsters drafted into the panel.

He may have been a little surprised to get the nod for a starting role, but he shone on his debut in front of 50,000 fans at the Estadio Centenario.

Despite the huge step up in class, McCullough looked unfazed as he came up against Paris St Germain striker Edinson Cavani and former Manchester United star Diego Forlan.

"That's the biggest crowd and the best atmosphere I have been part of. It gives you the bug for it, big time," said the former Manchester United trainee.

"It definitely gives you a taste for more. Now that I have won my first cap I am hoping it is the first of many. I want to be a regular international.

"The lads beside me, Chris and Aaron, are both quite senior and there are a lot of caps there so they talked me through the game and helped me along.

"We had a game plan to try and get a result and it worked for a long time."

Northern Ireland now move on to Chile for a friendly game which takes place in the early hours of Thursday morning, UK time.

On England's World Cup Group D opponents, O'Neill said: "They are a good side but they do have weaknesses. A team with real quality in attack will cause them problems.

"Suarez and Cavani are probably the best strike force in the world, and if Suarez is not fit it will be a major blow for them.

"Uruguay are capable of getting to the last 16 and if they do that I do not think they will fear anyone."