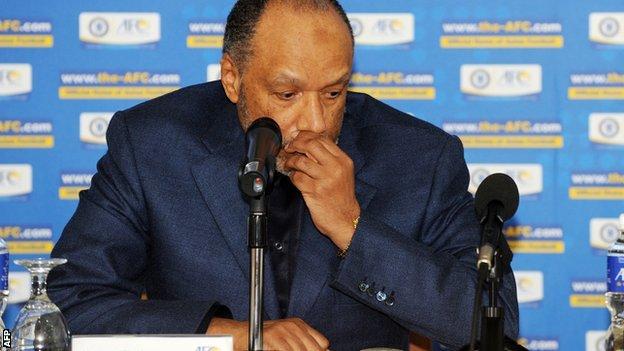 Fifa is facing fresh allegations of corruption over its controversial decision to award the 2022 World Cup to Qatar.

The Sunday Times has obtained millions of secret documents - emails, letters and bank transfers - which it alleges are proof that the disgraced Qatari football official Mohamed Bin Hammam made payments totalling US$5m (£3m) to football officials in return for their support for the Qatar bid.

Qatar 2022 and Bin Hammam have always strenuously denied the former Fifa vice-president actively lobbied on their behalf in the run-up to the vote in December 2010.

But, according to emails obtained by the Sunday Times and seen by the BBC, it is now clear that Bin Hammam, 65, was lobbying on his country's behalf at least a year before the decision.

The documents also show how Bin Hammam was making payments directly to football officials in Africa to allegedly buy their support for Qatar in the contest.

Qatar strongly denies any wrongdoing and insists that Bin Hammam never had any official role supporting the bid and always acted independently from the Qatar 2022 campaign.

When approached by the Sunday Times to respond to their claims, Bin Hammam's son Hamad Al Abdulla declined to comment on his behalf.

Although the vast majority of the officials did not have a vote, the Sunday Times alleges Bin Hammam's strategy was to win a groundswell of support for the Qatari bid which would then influence the four African Fifa executive committee members who were able to take part in the election.

The Sunday Times also alleges that it has documents which prove Bin Hammam paid 305,000 Euros (£250,000) to cover the legal expenses of another former Fifa executive committee member from Oceania, Reynald Temarii.

Bin Hammam was initially banned from football for life in July 2011 after being found guilty of attempted bribery.

The allegations centred around bids to buy votes in the Fifa presidential election of that year.

However his ban was annulled a year later by the Court of Arbitration for Sport which said there was insufficient evidence to support the punishment.

Bin Hammam then quit football saying he had seen the "very ugly face of football".

Fifa issued him with a second life ban in December 2012 for "conflicts of interest" while he was president of the Asian Football Confederation.

In March 2014, the Daily Telegraph reported a company owned by Bin Hammam had paid former Fifa vice-president Jack Warner and his family more than £1m. Payments were claimed to have been made shortly after Qatar won the right to host the 2022 World Cup.

Temarii, from Tahiti, was unable to vote in the contest as he had already been suspended by Fifa after he was caught out by a Sunday Times sting asking bogus American bid officials for money in return for his support.

But the paper now alleges that Bin Hammam provided him with financial assistance to allow him to appeal against the Fifa suspension, delaying his removal from the executive committee and blocking his deputy David Chung from voting in the 2022 election.

The paper claims that had Chung been allowed to vote he would have supported Qatar's rivals Australia. Instead there was no representative from Oceania allowed to vote, a decision which may have influenced the outcome in Qatar's favour.

The paper also makes fresh allegations about the relationship between Bin Hammam and his disgraced Fifa ally Jack Warner, from Trinidad.

Although Warner was forced to resign as a Fifa vice-president in 2011, after it was proved he helped Bin Hammam bribe Caribbean football officials in return for their support in his bid to oust the long-standing Fifa president Sepp Blatter, the paper says it has evidence which shows more than $1.6m was paid by Bin Hammam to Warner, including $450,000 in the period before the vote.

The new allegations will place Fifa under fresh pressure to re-run the vote for the 2022 World Cup, which was held in conjunction with the vote for the 2018 tournament, in which England were eliminated in the first round with just two votes.

Fifa's chief investigator Michael Garcia is already conducting a long-running inquiry into allegations of corruption and wrongdoing during the 2018/22 decisions. He is due to meet senior officials from the Qatar 2022 organising committee in Oman on Monday.

But that meeting may now have to be postponed in light of the Sunday Times revelations which have raised important new questions about the link between Bin Hammam and the successful Qatari World Cup campaign.