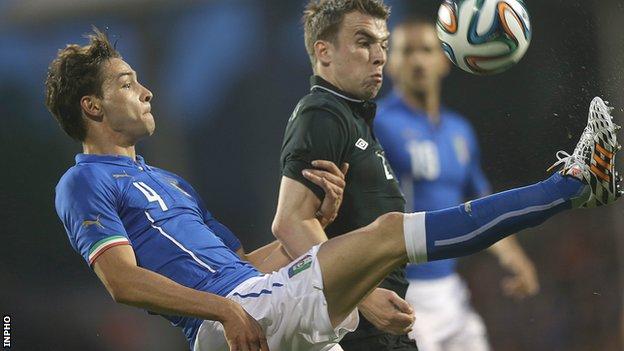 Republic of Ireland boss Martin O'Neill described his team's display in their 0-0 draw against Italy as "phenomenal".

The Republic impressed against the first of England's World Cup opponents, with Stephen Quinn going close to a late winner when he hit the crossbar.

"We were tentative early on but then we just roared into the match - we were magnificent," said O'Neill.

"We defended strongly, played some really great stuff and could have scored a number of goals."

The build-up to the game was overshadowed by assistant manager Roy Keane being linked with the vacant Celtic manager's job.

But the Republic responded well after last Sunday's disappointing 2-1 defeat by Turkey at the Aviva Stadium.

"There is genuine disappointment that we didn't win that match," O'Neill told Setanta Sports.

"There was a little nervousness at the start, some new blood coming in, and it was just a matter of settling down."

O'Neill was particularly pleased with his side's passing.

He said: "We had a spell in the second half where we kept it forever and made some great chances - we were magnificent.

"We were also able to manoeuvre in tight spaces. Aidan McGeady has been sensational, beating players with virtually no space to do it. All told it was so pleasing."