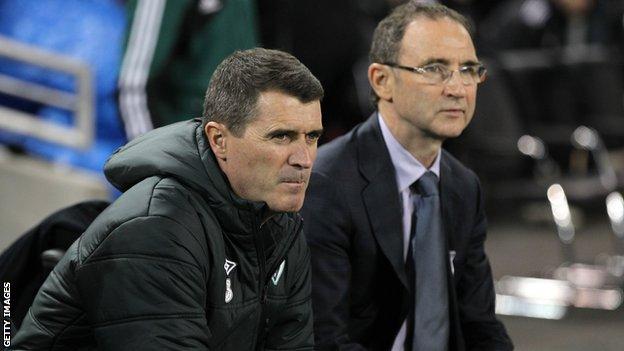 Keane, 42, is a candidate to succeed Neil Lennon at Celtic, having met with the Scottish champions' majority shareholder Dermot Desmond.

The Republic of Ireland fly out to America this week for friendlies against Costa Rica and Portugal.

And O'Neill said: "We would all be very disappointed if he left. I think this issue will be resolved by Wednesday."

On Friday, Celtic chief executive Peter Lawwell confirmed that Keane was one of "five to 10" people being considered for the manager's job, but stressed that no-one had yet been offered the post.

Former Manchester United skipper Keane, who played 13 times for Celtic before retiring in June 2006, has been assistant to O'Neill since last November.

"I have not spoken to Keane on this matter because we were focused on the game against Italy," O'Neill said after his side's goalless friendly draw at Craven Cottage on Saturday evening.

"My assumption is that Celtic, amongst other clubs, are looking at potential candidates.

"They have games coming up and they will want to make a decision fairly soon.

"My own view is that he has settled in very well indeed. The players have really taken to him, something I knew would be the case.

"He has been terrific. I think he is really enjoying this experience so it will be a disappointment if he left. The players would love him to stay.

"But I reiterate that this situation will be resolved before we travel to the United States."