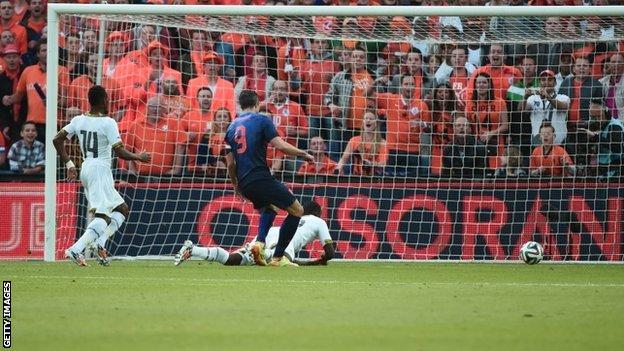 Van Persie, 30, was out for six weeks towards the end of the Premier League season because of a knee injury, but has quickly regained his scoring touch.

He tapped in a fifth-minute winner from close range on Saturday, adding to his volley in the draw against Ecuador.

"Ghana pinned us back and that made it difficult," said Netherlands manager Louis van Gaal, who will take over as Manchester United boss after the World Cup.

"It [our attacking fluency] will get better. We've only just started."

The Dutch complete their warm-up programme with a friendly against Wales in Amsterdam on Wednesday, while Ghana fly to the United States for a week of training and will meet South Korea in Miami on 9 June before travelling to Brazil.

Netherlands are in Group B at the World Cup alongside Spain, Chile and Australia. Ghana are in Group G with Germany, Portugal and USA.