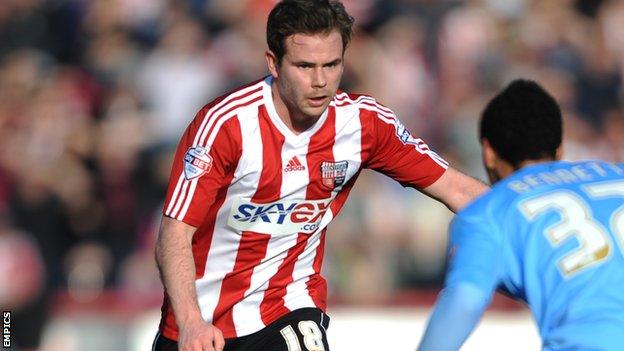 The 25-year-old spent the second half of last season on loan with the Bees, scoring seven goals in 22 appearances.

The former Republic of Ireland Under-21 international has signed a three-year deal with the west London club.

"Alan played a big role in our achieving the desired goal of promotion to the Championship," Bees manager Mark Warburton told the club website.

Judge began his professional career with Blackburn, making his senior debut in August 2008, but left Ewood Park in January 2011 when he moved to Notts County.

He re-joined Rovers last summer but only made 12 appearances for the Championship club in 2013-14 before clinching a loan switch to Brentford.

Warburton believes the permanent signing of Judge will give the club a boost as they prepare for life in the second tier.

"His evident playing ability is matched with an outstanding work ethic and level of professionalism," Warburton said.

"I have no doubts that Alan will make a significant impact in the Championship and I am very much looking forward to watching him continue his development with the club in the months ahead."