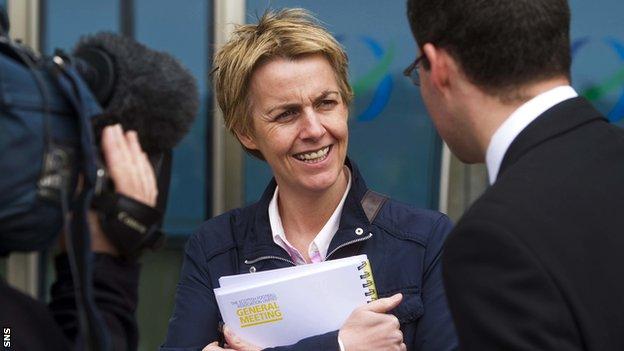 New chief executive Leeann Dempster is calling for unity as Hibernian begin preparing for life in the Championship.

Dempster, formerly with Motherwell, has taken over from under-fire chairman Rod Petrie, who is facing calls for his resignation following relegation.

Petrie intends to stay on in a non-executive capacity.

"We need everyone to be together," said Dempster in a club statement. "With everyone working together, we can improve things quickly at the club."

In the immediate aftermath of Hibs' play-off defeat by Hamilton, Petrie, who has been on the board at Easter Road since 1996, said he took "responsibility for the position that the club finds itself in" but added that it "would be wrong for me to abdicate that responsibility at this time and walk away".

The Hibs Supporters' Association subsequently asked the chairman to leave the club and a "Petrie Out" campaign, fronted by former player Paul Kane, is planning a demonstration at the stadium on Saturday.

News of Dempster's move from Fir Park broke in late April and she starts her new job with the Edinburgh club reeling after their second relegation in the post-World War II era.

Petrie, who owns a 10% stake in the club, appears determined to stay on.

The statement adds that Dempster will be in charge of "all club activity", including "football, community and supporter engagement, marketing and communications, and finance".

It goes on to say that Petrie will remain as the club's "main link to major shareholder, Sir Tom Farmer", who has the remaining 90% holding.

Eager to stress her autonomy, Dempster said: "I understand people are upset and concerned about relegation, but they should understand that I am confident that I have the authority and freedom to make the decisions I want."

Dempster's near six-year stint at Fir Park resulted in five European campaigns for Motherwell and three consecutive top-three finishes in the top flight.

However, her fan ownership project, the Well Society - initiated in 2011 - has struggled to meet targets and the Lanarkshire club has posted financial losses in the last three seasons.