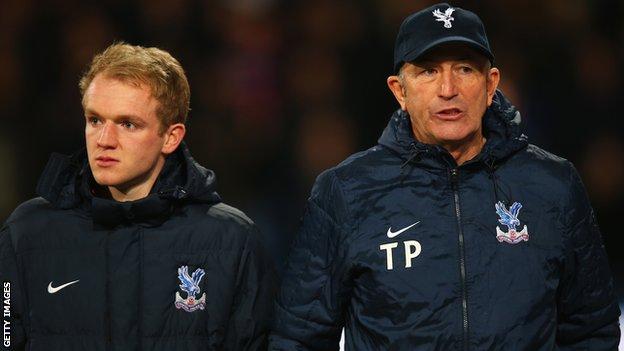 Crystal Palace midfielder Jonathan Williams says Swansea City are interested in him, although he does not think any offer has been made so far.

The 20-year-old wants to stay at Selhurst Park, but confirmed that he will look elsewhere if he is not in manager Tony Pulis' first-team plans.

"I spoke to my agent who says [Swansea] were interested," said Williams.

"I need to play football, preferably at Palace, but if not I'd have to consider playing elsewhere."

Williams made his Wales debut in 2013 and has been named in the squad to face Netherlands in a friendly in Amsterdam on Wednesday.

Swansea have already made one signing since the end of the Premier League season, bringing in former Arsenal goalkeeper Lukasz Fabianski on a free transfer.

They have also reportedly had a bid accepted for FC Twente forward Luc Castaignos, but Williams said that he had not received "any direct contact" with the Swans.

"Swansea are a great team," said Williams. "They've shown over the last few years that they can do it at the top level.

"I haven't heard much personally about if anything's been offered... but I'm sure I'll know more about it in the next few weeks."

The Welsh midfielder began his career at Crystal Palace as a youth player and has gone on to make 52 league appearances, 36 as a substitute.

But he was unable to cement a first-team place at Selhurst Park this season in the Premier League and was sent on loan to Ipswich Town in March, where he featured in all of their remaining fixtures.

"It's hard to think about [leaving] because I've been there for so long," said Williams.

"If I can get in the team at Palace, that's the main thing.

"But I need to play football at Palace, and I wasn't last year because I ended up going on loan."