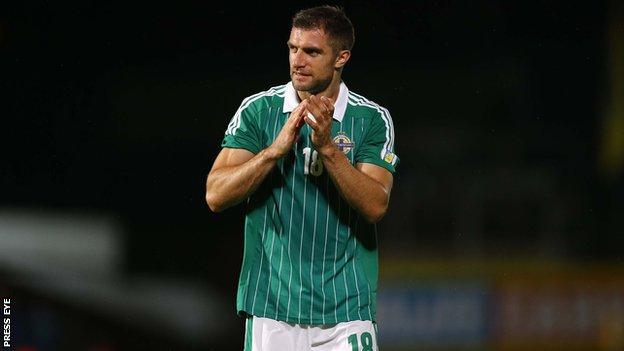 The 34-year-old is out of contract for the first time in his career.

Hughes, who will win his 90th international cap against Chile on Wednesday night, moved from Fulham to QPR in January on a short-term deal which has now expired.

"It's all new to me and that is why I'm trying not to get too excited or worried about it," he said.

The Cookstown native is waiting to see if he will be part of QPR's Barclays Premier League return, having ended the season as an unused substitute in the club's dramatic play-off final success against Derby.

If QPR manager Harry Redknapp opts to offer the experienced centre-half new terms, Hughes could find himself swapping places with his former team-mates as they prepare for life in the Championship.

At present the former Newcastle and Aston Villa man, who had played in the top tier for his entire career prior to his spell at Loftus Road, is in the unfamiliar position of waiting on developments.

"I've always moved to another club with time left on my contract or had a new contract in place," said Hughes, who played in Northern Ireland's narrow 1-0 loss to Uruguay last week.

"I will be speaking to my agent and I will find out more when I get home to find out what's going on.

"The play-offs took my mind off it and so are these games for Northern Ireland so that is good.

"The big thing was to get to the end of the season and see what happened.

"From there I've come on this trip and the focus was to go and enjoy this and the two games after the season ended, because I haven't played as much as I would have hoped in recent weeks.

"I will have a few weeks' holiday after this and then look at my options."

Hughes, who is in position to become the first Northern Ireland outfield player to reach a century of caps, is making his first ever appearance on a summer tour in South America.

He retired from international football in 2011 but manager Michael O'Neill persuaded him to return and he has been rewarded for his approach by Hughes' complete commitment.

"You look at this trip and it's very easy to think we were just going out for the benefit of Uruguay and Chile - that they need a British-style team to play against to get used to the World Cup and we are just cannon fodder - but how it's been prepared and how we travelled it has been one of the best trips I've ever been on," said Hughes.

"This the furthest away I've ever been with Northern Ireland and a lot of that is down to the manager.

"When I first spoke to him about coming back to international football it was this sort of thing that convinced me to come back.

"He does care and he knows the finer details that really matter and make the difference."