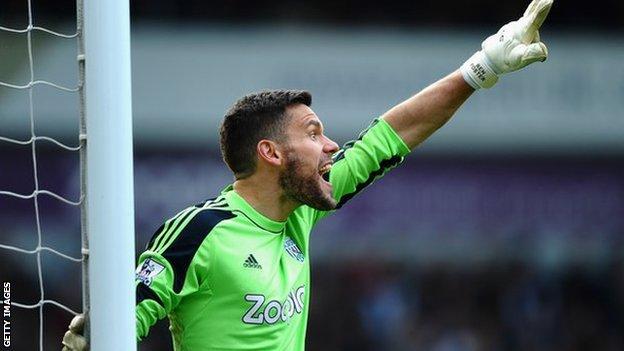 England goalkeeper Ben Foster has no regrets about his self-imposed international exile and insists: "It's something I'd do again."

West Brom's Foster quit the natonal team for two years in 2011 when Fabio Capello was in charge.

However, he made himself available when Roy Hodgson, who had been his manager at The Hawthorns, was appointed.

The 31-year-old received heavy criticism in some quarters for the decision, but says: "People are entitled to give that criticism because most would give their right hand to be at a World Cup. Even now I stick by the decision - it's something I'd do again."

Foster added: "It was a very big decision. We had a new-born baby and another child under a year old. Family is a very important thing for me and I felt that I was missing them growing up.

"I was always going to come back to the team if the manager was happy to have me and thankfully the manager was. It's fantastic now to be in a World Cup."

Foster also pointed out his decision to withdraw from selection was not a reaction to the prospect of becoming Hart's permanent long-term deputy - with no prospect of being promoted to the lead role.

"That genuinely wasn't the reason," said Foster. "It was the fact I had a newborn baby and another child under a year. They're like sponges at that age, taking everything in and it was all too much to deal with.

"All I was thinking about was back home with my family and it was affecting my football.

"I spoke to my wife, my family, my mum and dad. We all talked about it - going away from them and all you think about is your family. It's like homesickness.

"The family reaction was a mix. A few thought I was barmy and a few could understand it.

"My brothers Adrian and Brett, who are Sunday league players, thought I was barmy. They were like 'what are you doing? What are you thinking?' I could completely understand it. It's their opinion. That's fine. I knew what I wanted to do. My mum and dad were supportive, my sister too."

The former Stoke, Manchester United and Birmingham man has won six caps since making his debut against Spain in February 2007.

He last played for England in the 1-1 draw with Republic of Ireland last May, coming on as a half-time substitute for Joe Hart.

Foster was speaking after England had their first training session after flying to Miami on Sunday as they step up their preparations ahead of their World Cup opener against Italy in Manaus on 14 June.

England were forced to train indoors after torrential storms swept through Miami. Similar stormy conditions are forecast for the rest of the week.

Hodgson's team play two friendlies in the United States this week, facing Ecuador on Wednesday before meeting Honduras on Saturday.