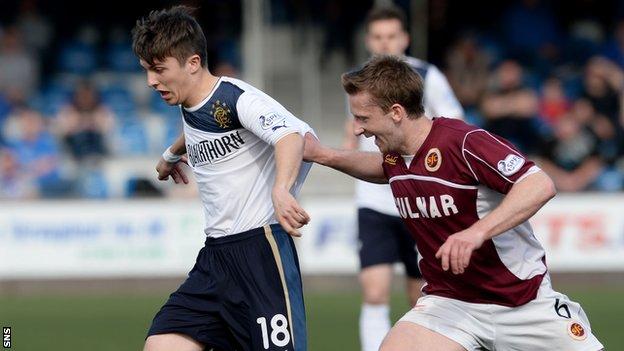 Dundee United have signed Charlie Telfer from Rangers, with the Scotland Under-19 cap saying the prospect of first-team football was his motivation.

Rangers will be due compensation for the 18-year-old, who made his debut for the League One champions in April.

"I have watched how the younger players at United are allowed to develop in the first team," said midfielder Telfer, who had rejected a new deal at Ibrox.

"And that has been a big reason in my decision to join the club."

Rangers manager Ally McCoist's room for manoeuvre in the transfer market this summer has been hampered by renewed financial uncertainty at Ibrox.

And right-sided Telfer has signed a three-year contract at Tannadice after having spent more than 10 years with the club he supported as a boy.

"The opportunity to play in the Scottish Premiership next season was also something I could not turn down," he told United's website.

"When I met the manager and saw the facilities, I knew that I can further my football development at Dundee United.

"United received a lot of praise for their football last season and it was deserved as it is very easy on the eye. I like to get the ball down and play and this is the ideal place for that.

"I believe I am ready to play in the first team, but I have to show the manager that is the case."

United manager Jackie McNamara last summer plucked Andy Robertson from Queen's Park and the left-back has gone on to become a Scotland international.

Former Celtic and Scotland defender McNamara is hopeful that the player viewed as one of the stars of Rangers' Youth Cup-winning side can also blossom on Tayside.

"Charlie is a very gifted footballer with great awareness and has excellent delivery from set-pieces," he said.

"His style of football will settle in perfectly with the rest of the young talent we are currently producing at the club.

"He is a sensible, level-headed young man who wants to play for Dundee United and I am delighted that we have secured his services for the next three years."