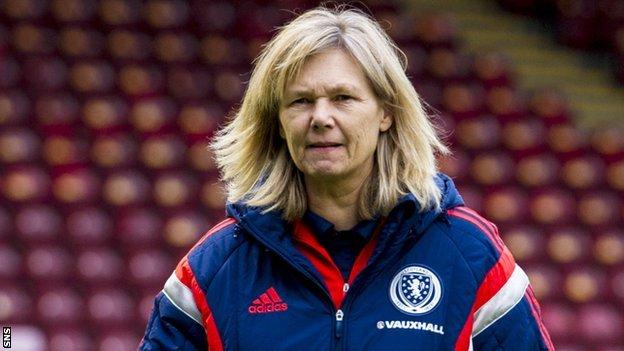 Scotland coach Anna Signeul believes her side can cause an upset against her compatriots and World Cup qualifying Group 4 favourites Sweden.

The Scots have won all six of their matches, but Sweden also have a 100% record ahead of their visit to Fir Park on 14 June.

"Sweden are ranked five in the world and three in Europe, so they are a very good side," Signeul told BBC Scotland.

"But we are really excited and the players fancy their chances."

It is a really tough one and, to get something out of the game, we need play very well, but I think we can do that

Signeul, whose side are at an all-time high of 19 in the world rankings, witnessed the Swedes defeating Northern Ireland 3-0 in Vaxjo.

"I saw them two weeks ago against Northern Ireland and they were absolutely superior in everything," she said.

"It is a really tough one and, to get something out of the game, we need play very well, but I think we can do that."

Signeul has chosen a squad that not only includes four players playing in Sweden with Vittsjo but two members of the Arsenal squad that won the FA Women's Cup in England at the weekend.

Meanwhile, forward Kim Little, who moved from Arsenal to Seattle Reign last year, has scored nine goals in the first 10 games of the NWSL in the United States.

"We have 13 players playing outside Scotland, 11 of them full-time players," said the Scotland coach, whose side also face the Northern Irish in Belfast on 19 June.

"That shows a huge development of the game here. A couple of years ago, we only had a couple of players full-time.

"It is not good for the game here at home that all the good players are disappearing, but it just shows the value of our players, how good they are, that professional clubs want them.

"We need to continue to work with the league here at home so the players here also develop and the gap between the players at home and those abroad does not become a large one, but I think we do that."