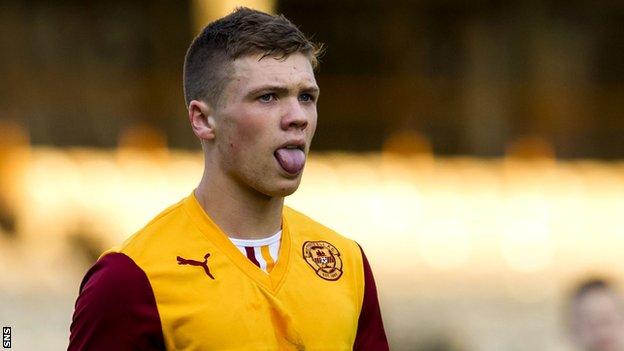 Motherwell have shown faith in Craig Moore by handing the forward a contract extension despite his serious injury at the end of last season.

The 19-year-old's current deal was not due to end until the end of next term.

But Moore has signed a new agreement that secures his future at Fir Park until summer 2016.

Manager Stuart McCall said: "Although he might miss the start of the campaign, he will have a huge part to play, not only next season but beyond."

Moore, who spent time on loan to Cowdenbeath in 2013, made 20 first-team appearances, mainly as a substitute, as Motherwell finished runners-up in the Scottish Premiership.

He picked up a cruciate ligament injury in the penultimate game of last season, but Motherwell report that his surgery went well and say "the hope now is the striker will be back ahead of schedule".

"We were delighted with Craig's contribution last season," McCall told his club website. "He really has made the step up.

"He has already proven with his scoring proficiency with the under-20s, his fruitful time out on loan and his appearances with the first-team, that he is going to have something to offer.

"He's a little different to what we have currently in terms of his style and the way he plays.

"Obviously his injury is a blow, but this club has a great record of looking after players, nursing them back to fitness and getting the best from them. Craig will be another example."

Moore confirmed that he was likely to miss the start of next season but hoped to play some part in the campaign.

"The club have been excellent and have shown a great deal of faith in me that I will repay," he said.

"Obviously the injury was a huge blow as I wanted to have a good pre-season and really challenge for a starting slot next season.

"Obviously, it wouldn't be right to put a time frame on my return, but I am certainly hopeful it will be ahead of the normal schedule."

Meanwhile, McCall says there are "still one or two deals that we are close to agreeing" and hoped to announce them shortly.