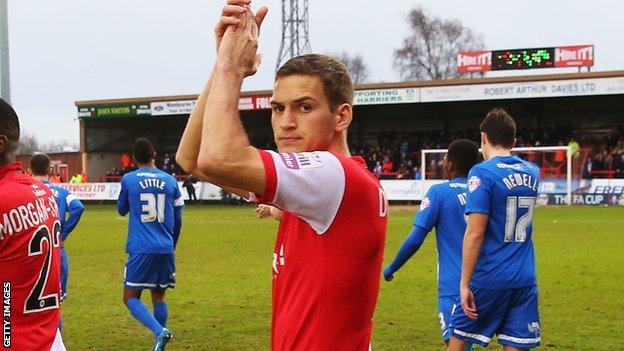 The left-back, 24, who made 108 league appearances in three years with Harriers, can also play at centre-half.

Demetriou, who has been capped both at England Colleges and England C level, has signed a two-year contract.

"Kidderminster Harriers gave me the opportunity to play in the Conference which I took and I haven't looked back since," said Demetriou, who had been offered a new deal at Aggborough.

"In the three years I've been there we've finished sixth, second and seventh, when we had an off season and the players had to be strong to achieve with everything that was going on off the pitch.

"It was a very hard decision to leave and I had a number of sleepless nights thinking about it but, for the progression of my career, I needed to move into the Football League.

"I've not had the chance to play in the Football League yet and that is the one thing I wanted to do during my career."

Demetriou had trials with both Leicester City and Fulham before learning his trade with the Glenn Hoddle Academy in Spain.

He joined Harriers in June 2011 on an initial one-year contract following his departure from Eastbourne Borough.

Meanwhile, Town midfielder Dave McAllister has had an operation to clear up the ankle problem that kept him out of his side's final eight games of the season - in the hope that he will be fit to start next season in League Two on 9 August.