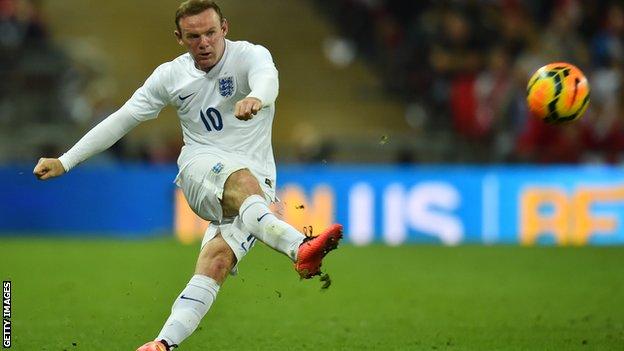 Rooney's ex-Manchester United team-mate Paul Scholes has suggested the 28-year-old may be past his best as doubts have been raised over his starting place.

"Wayne Rooney is the only one that comes to mind when you think of where our class players are coming from," said 1966 World Cup winner Charlton.

"Wayne Rooney will have to play. He's just got that something extra."

"Wayne Rooney scored one goal against the top teams this season, a free-kick against Manchester City in a 4-1 defeat. I just don't know if the spark is there."

Read more - Wayne Rooney: Where should he play?

Rooney underwent a special training programme at England's camp in Portugal following the end of the Premier League season as he aimed to return to full fitness following a groin injury.

However, he struggled to make an impact in the 3-0 win over Peru at Wembley last Friday in his first game in just over a month.

The forward has 38 goals in 90 England games but questions have been raised over his place in manager Roy Hodgson's side, especially considering his previous record at major tournaments.

He had only just recovered from a broken bone in his foot in 2006 and had his build-up to the 2010 tournament disrupted by an ankle injury in late March.

At the 2012 European Championships, he missed the first two games because of suspension.

But Charlton, a Manchester United director, added: "In every position there seems to be a little bit of doubt in my mind, apart from Wayne Rooney and even he would want to play in certain positions, but it's up to the manager."