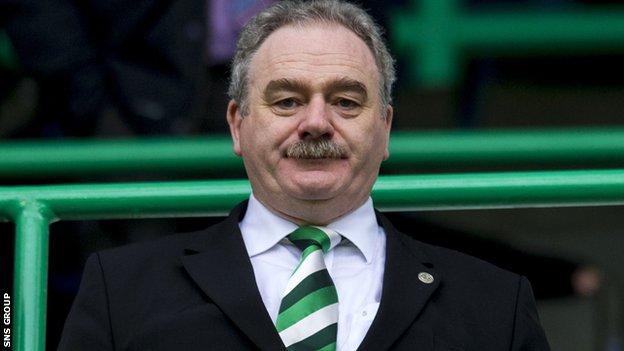 Those behind the "Petrie Out" campaign asked for permission to gather in the East Stand on Saturday.

But their request was turned down, with the relegated Edinburgh club citing renovation work, logistical reasons and the timeframe.

"We are very disappointed the club is shutting the doors on its own fans," said former player Paul Kane.

The 48-year-old, who played for Hibs between 1982-90, is fronting the demonstration, which will now take place outside the ground.

"For health and safety reasons we asked for access to the East Stand, which holds 6,000 people, rather than have a large crowd gather outside the ground," he said via a statement.

"The health and safety of Hibs fans on the day is paramount. We will speak to the police and the council about it .

"We did contact (chief executive) Leeann Dempster at the earliest opportunity, as soon as she took up her post at Easter Road yesterday morning.

"We are also disappointed that we heard our request had been turned down through the media - not from the club.

"It would have shown some courtesy and respect to the fans to have contacted us first.

"It is another PR own goal but you get used to that. All too often the supporters seem to be an afterthought."

Dempster's arrival from Motherwell will see Petrie move into a non-executive role.

Petrie, who is also the chairman of the Scottish FA's professional game board, has stated that he intends to stay but campaigners hope to apply pressure on his position.

On her first day Dempster made an appeal for unity, adding: "I am confident that I have the authority and freedom to make the decisions I want."