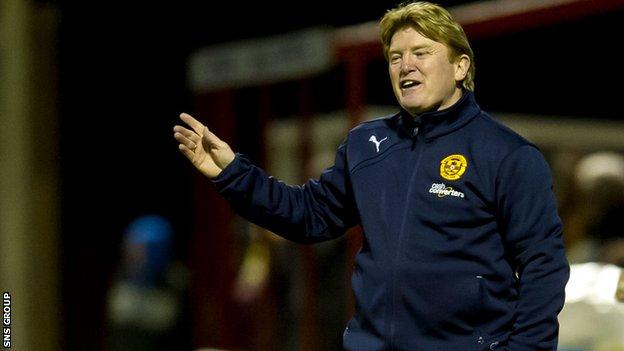 Motherwell are confident of keeping boss Stuart McCall, as general manager Alan Burrows plans for a summer of continuity at Fir Park.

And Burrows told BBC Scotland: "He's certainly planning for next season in terms of players.

"He's assured me that he is not looking to move anywhere, with the obvious caveat in football that you don't know what's going to happen tomorrow."

Former Scotland midfielder McCall, 49, rejected an approach from Sheffield United last year and has another 12 months to run on his contract.

"I'm certainly hopeful that Stuart McCall will be here in the dugout for the first game of next season," added Burrows, who has been promoted from his previous media relations duties.

"What he's done in his three-and-a-half years here is nothing short of miraculous.

"I don't think he quite gets the credit he deserves.

"We've maybe been the victims of our own success and people start to expect that every year. If you're challenging for Europe every year, it's not a story any more.

"But I think Stuart is quite happy to fly under the radar.

"If people are looking at your manager, it's because you are doing something right.

"I've got no problem with other teams being attracted to our talent."

James McFadden will be moving on and Shaun Hutchinson is a free agent but midfielder Josh Law and goalkeeper Dan Twardzik have been recruited.

"It was a deliberate show of intent from the club, we wanted to show our supporters that we really mean business going into the next campaign," added Burrows.

"Usually the summer months at Motherwell mean a big upheaval - a lot of players coming and going last year was a good example of that.

"But this time it's less of a rocky road in that sense and we hope to have a more settled squad.

"If there are going to be additions, it will be maybe a handful. The onus has been on keeping last season's squad together."