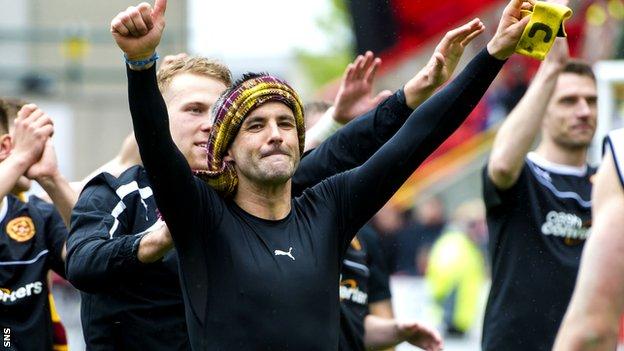 The 34-year-old was out of contract this summer after 10 years at 'Well over two spells.

"I'm delighted to sign on again and be a part of what I hope will be another few successful years," Lasley said.

"We've managed to tie up most of the squad; the positive thing is the continuity, which should give us a platform to go again next season."

'Well won 1-0 at Aberdeen on the last day of the Scottish Premiership season to seal runners-up spot in the table for the second straight season.

"After the real high at the end of the season, the summer is always a time of uncertainty, but it has been no secret I wanted to stay here and hopefully we can continue the great run the club has been on." Lasley told the Motherwell website.

"I've loved life at the club and I think I've made a decent contribution in that time. Most importantly, though, I'd like to think there is more to come from me."

Motherwell manager Stuart McCall said: "I am absolutely thrilled. Keeping Keith at the club was imperative because he is such a huge influence both on and off the park.

"It's often said in football that a team is only as good as the senior pros. There are few better than Las.

"Although he's in his mid 30s, he shows no signs of slowing down whatsoever. He's one of the fittest in the squad, won the club's player of the year last season and was pivotal in the fantastic way things ended."