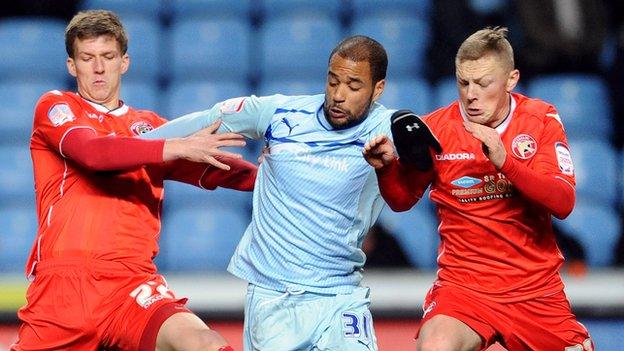 Walsall duo Sam Mantom and Paul Downing are looking forward to the challenging of replacing captain Andy Butler after his departure to Sheffield United.

The 30-year-old skipper was keen to move back to his native Yorkshire to cut down on daily travelling time.

"You could understand why he did it for his family," Downing told BBC WM. "All the time travelling took it out of him.

"But people will have to step up to fill the void. It's an opportunity for someone. We still have good players."

Downing, who will be looking for a new central defensive partner next season, added: "We built up a good partnership and knew each other's games.

"Andy was our most consistent player. He was a good friend of mine off the pitch too.

Midfielder Mantom, who is contracted to the Saddlers until the summer of 2016, is a candidate to take over as skipper, following Butler's move to Bramall Lane.

"Andy Butler's boots are a big hole to fill," said Mantom, who is set for his second full season at Bescot, following his initial loan move from West Bromwich Albion in March 2012.

"But, if it was offered, I'd take it. I'd like to try and become that leader that West Brom said I wasn't.

"Andy was a great leader on and off the pitch. Everyone respected him. He's a great person as well. But football is all about moving on.

"We've got a core to the team. And the gaffer knows what we need to strengthen."

Doncaster-born Butler, who began his career with Scunthorpe United, then played for Grimsby Town and Huddersfield Town, will cut up to three hours of commuting in his car every day by moving to Bramall Lane.