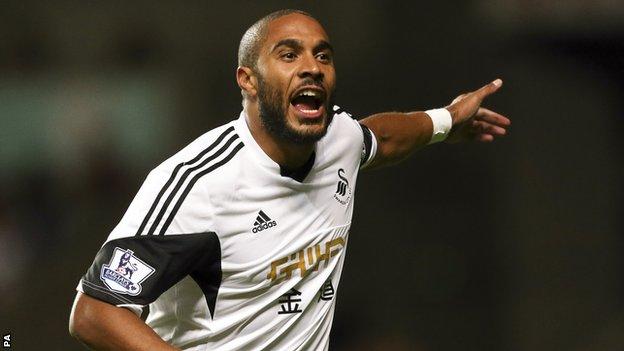 Swansea City manager Garry Monk says they have started discussing a new contract with Ashley Williams to keep him at the Liberty Stadium.

Arsenal and Queen's Park Rangers are two of the clubs linked with Williams.

But Monk is confident the Wales centre-back, 29, and striker Wilfried Bony, 25, will stay with Swansea.

"We're in negotiations with his representatives and trying to put a deal across so that Ash will be here for the future of the club," Monk said.

No one will dictate to the club, at the end of the day we decide where our players go

"I know Ash wants that, I want that, the club wants that and that's what we're working towards as we speak."

Ivory Coast striker Bony has been linked with a move away from Swansea, as has Netherlands goalkeeper Michel Vorm.

But Monk says that despite the arrival of Poland goalkeeper Lukasz Fabianski on a free transfer from Arsenal, Vorm remains in his plans, as does Bony who hit 25 goals this season.

"I spoke to him [Bony] at the end of the season and he knows how I feel, he knows how the club feels, he knows what I expect from him," Monk told BBC Radio Wales Sport.

"I just want him to concentrate on the World Cup, have a good World Cup and he'll be coming back as a Swansea City player.

"That's what I have in my mind unless something happens that we can't predict, but as of now he's a Swansea City player and that's the way it should be.

"Every player that is under contract at Swansea is a Swansea City player... no one will dictate to the club, at the end of the day we decide where our players go and what players stay.

"I know players will push for moves and do this and that, but ultimately the decision is with the club which is a good position to be in."