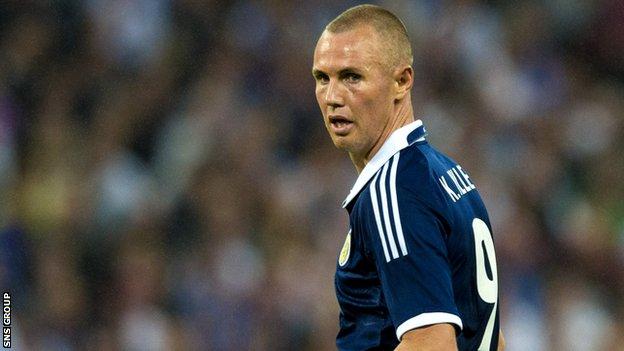 Kenny Miller has joined Rangers for a third time, signing a one-year deal with Ally McCoist's side.

The 34-year-old striker was released from his Vancouver Whitecaps contract in early May.

Miller finished a two-and-a-half-year spell at Rangers in January 2011 by joining Bursaspor, having previously played at Ibrox between 2000 and 2001.

"I am thrilled to return to Rangers for a third time," Miller told the club's official website.

"I have enjoyed so much success at this great football club and I am determined to repeat it again next season and beyond.

"Rangers is a special football club and we are on the rise again. I want to play my part as we look to get back to the top of Scottish football.

"I had a number of offers once I left Vancouver but I had my heart set on returning to Ibrox and I can't wait to get started again."

Miller, capped 69 times, ended his Scotland career after scoring in a 3-2 defeat by England at Wembley in August last year.

He began his career with Hibernian, who Rangers will be playing against in next season's Championship, and also turned out for Celtic, Derby and Cardiff before his switch to Major League Soccer in July 2012.

Miller, currently working on his coaching licence with the Scottish Football Association, trained with Rangers on several occasions during breaks from Canada.

And McCoist said: "We are delighted to welcome Kenny back to Ibrox.

"He was a terrific player for us in the past, especially his second spell at Rangers, and we have won many trophies together.

"Kenny brings experience and pace to our forward line and will be a great influence on our younger players at Murray Park.

"He is a top class footballer and we look forward to seeing him in a Rangers jersey once again as we look to secure promotion to the top flight next season."