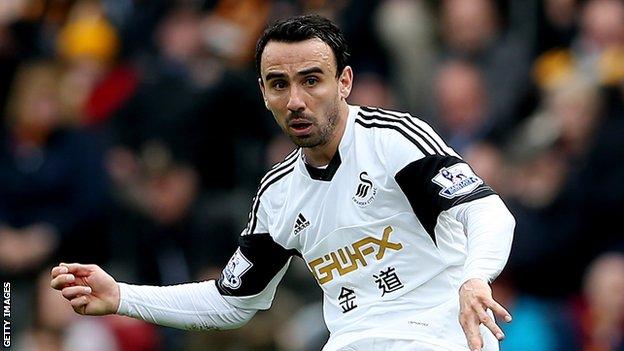 Leon Britton has signed a one-year contract extension with Swansea City, keeping the midfielder at the Liberty Stadium until at least July 2017.

The 31-year-old has played for Swansea in every division of the Football League and has proved himself in the Premier League.

Britton made 34 appearances for the Welsh club this season.

He first joined the Swans in 2002 when the club were in the bottom tier and helped them survive relegation.

Britton initially moved to Swansea on a season-long loan when the Welsh club were in Division Three.

He played in the famous 4-2 victory over Hull City on the final day of the season that saved the club from relegation to the Football Conference and signed permanently for the club shortly afterwards.

The former Arsenal trainee stayed with the Swans until June 2010 when he left to join Sheffield United on a free transfer.

But Britton spent only six months at Bramall Lane and admitted the move was a mistake before returning to Swansea in January 2011.

He signed a one-year extension in February 2013 but has again been rewarded following another impressive season, where he has maintained his reputation as one of the best passers in the Premier League.

Britton told the club's website: "To stay on at the club for an extra year on top of my current contract is something that I am delighted to do.

"I'm happy the club still feels I'm able to compete and do well at this level at my age. It's a big thing for them to have given me this extension and I want to repay the faith the board and manager has shown in me."

Britton has made 409 league appearances - 467 in all competitions - and said reaching 500 appearances is his next personal target.

Swansea boss Garry Monk said there was no sentimentality involved in the deal.

"The way he plays, the effort he puts in every day - he is an example to others in the squad," he added.

"It's massive for us to get Leon's contract sorted out because he is such an important player.

"Younger players and players we bring into the club need to look at players like Ash [Williams] and Leon and see how they work."