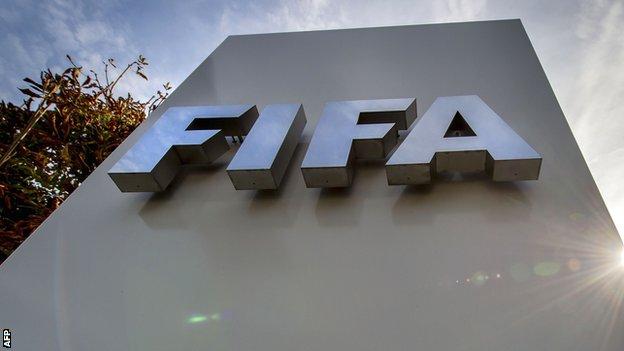 Qatari officials will be questioned by Fifa investigator Michael Garcia on Wednesday in the wake of damaging claims about the legality of the bidding process for the 2022 World Cup.

Bin Hammam was initially banned from football for life in July 2011 after being found guilty of attempted bribery.

The allegations centred around bids to buy votes in the Fifa presidential election of that year.

However, his ban was annulled a year later by the Court of Arbitration for Sport which said there was insufficient evidence to support the punishment.

Bin Hammam then quit the sport saying he had seen the "very ugly face of football".

Fifa issued him with a second life ban in December 2012 for "conflicts of interest" while he was president of the Asian Football Confederation.

In March 2014, the Daily Telegraph reported a company owned by Bin Hammam had paid former Fifa vice-president Jack Warner and his family more than £1m. Payments were claimed to have been made shortly after Qatar won the right to host the 2022 World Cup.

Garcia, an American lawyer, announced earlier this week that his investigation into the bidding process for both the 2018 and 2022 World Cup would conclude on 9 June.

He said he would file his final report to Fifa's independent adjudicatory committee six weeks later.

Russia won the right to stage the 2018 World Cup, while Qatar saw off Australia, Japan, South Korea and the United States to win the vote for the 2022 tournament.

The Sunday Times claims Bin Hammam, who is from Qatar, controlled a $5m slush fund that he used to buy the support of key officials for his country's World Cup bid.

Fifa sources insist Garcia was already aware of the allegations following a previous investigation into Bin Hammam's tenure as head of the Asian Football Confederation (AFC).

Qatar's bid committee said it was co-operating with Garcia's inquiry, adding: "We will take whatever steps are necessary to defend the integrity of Qatar's bid and our lawyers are looking into this matter.

"The right to host the tournament was won because it was the best bid and because it is time for the Middle East to host its first Fifa World Cup."

As Garcia prepares to meet members of Qatar's bid committee, The Sunday Times has published a report by accountancy firm PricewaterhouseCoopers (PwC) that centres on Bin Hammam's conduct during his failed bid for the Fifa presidency in 2011.

While the contents of the report were reported widely back in July 2012, it nevertheless provides a fascinating insight into the way Bin Hammam used "personal presidential accounts" to transfer large cash payments to fellow football officials and to buy senior football leaders gifts.

In total, PwC found that $2m was paid out of AFC accounts for the benefit of third parties.

"It is also a matter of concern that payments have been made, apparently in Mr Hammam's personal capacity, to a number of AFC member associations and associated individuals," the report concluded.

"We do not know the reasons for these payments."

Bin Hammam denied allegations of wrongdoing at the time and appealed successfully against Fifa's original decision to ban him from football for life in 2011 after he was found to have breached their ethics code for apparently bribing Caribbean football officials during his presidential bid.

But Fifa used the evidence from the PwC report to reinstate his lifetime ban in 2012.

Garcia is known to have considered the PwC report as part of his long-running inquiry into the 2018 and 2022 World Cup bids.

But because Bin Hammam has already been banned from football, it is understood Garcia has not spent too much time looking into his activities or links to the Qatar campaign.

BBC Sport has learned that Garcia has written to the Sunday Times requesting any material which may help his inquiries.

However, the newspaper is concerned that he may be winding up his investigation prematurely, rather than extending it to review the millions of secret documents it says it has obtained.