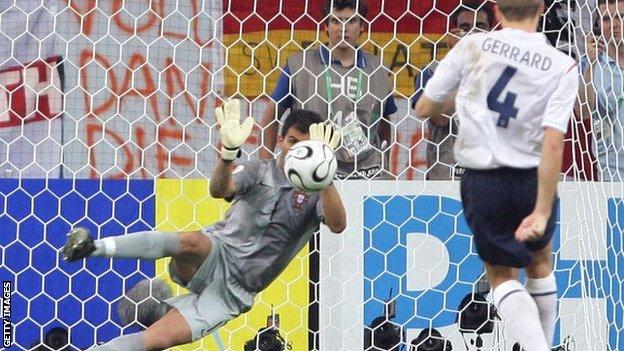 Captain Steven Gerrard says the England squad have been practising penalties "a lot" ahead of the World Cup but insists they are not obsessed with spot-kicks.

England have the worst penalty shootout record in World Cup history, with three defeats out of three.

Six of their last 10 major tournaments have ended in shootout losses.

"I understand the fixation because we've failed in a few," said Gerrard. "But don't get carried away with it because it might never come about."

The captain added: "Hopefully we perform well enough in 90 minutes or 120 minutes to prevent it going to a shootout, but we will be ready if it comes around."

They last won a shootout at Euro 96, beating Spain in the quarter-finals before losing to Germany - on penalties - in the last four.

Sports psychiatrist Dr Steve Peters, who made his name with the British Olympic cycling team and has also worked with both Liverpool and former world snooker champion Ronnie O'Sullivan, will help the squad with mental preparation in Brazil.

"We are going to practise penalties a lot, but it is a difficult situation to put into words," Gerrard, who has worked with Peters at Anfield, told BBC Radio 5 live Sport.

"A penalty shootout is a more pressurised situation than any one penalty in a league game. You have an awful lot more time to think about your penalty and what is at stake is a lot bigger."

Gerrard missed a penalty against Portugal in the quarter-finals of the 2006 World Cup but scored in a shootout defeat by Italy at Euro 2012.

He said he had learned from his 2006 experience in Germany, adding: "It was a difficult atmosphere to be in."