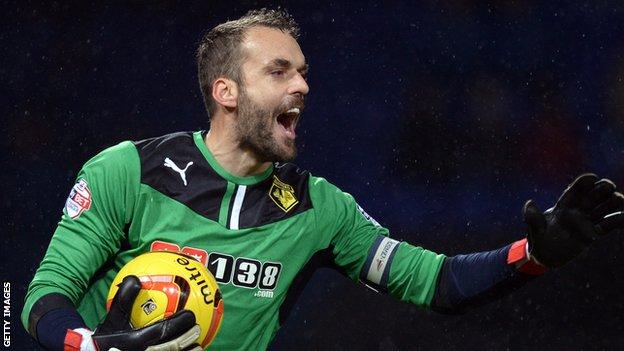 Watford captain Manuel Almunia will leave the club when his contract expires at the end of the month.

Defensive pair Fitz Hall and Lucas Neill and midfielder Albert Riera, who were all on short-term contracts, will not be offered new deals.

Technical director Gianluca Nani said: "Our thanks go to all the players whose contracts finish this summer."

Former Arsenal keeper Almunia, 37, joined the Hornets in 2012 and played 81 games for the club, but his departure looked likely when it was confirmed Tottenham's Heurelho Gomes would be arriving at Vicarage Road this summer.

Nosworthy, 33, spent the last two months of the season on loan at League One Bristol City, while academy product Jenkins failed to make an appearance this term.

Italian Cassetti, who is the same age as Almunia, was a regular under Watford boss Beppe Sannino and predecessor Gianfranco Zola and also featured 81 times.

"Special mention should go to captain Manuel Almunia for his true professionalism, and to Marco Cassetti for embracing the club after moving from Italy," Nani added.