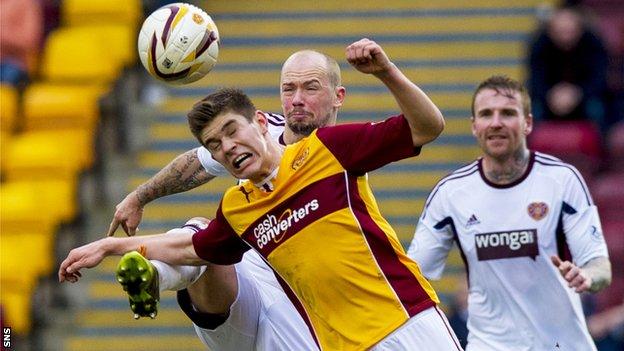 Motherwell have handed a new two-year contract to midfielder Jack Leitch, tying the 18-year-old to Fir Park until summer 2016.

Leitch, a graduate of the club's academy, made his first-team debut in November, eventually turning out 10 times for Stuart McCall's side.

The Steelmen finished second in the Premiership, securing a European place.

"We asked Jack to step-up to the plate later last season and he did just that," McCall told the club's website.

The manager threw me in and, at my age, I can't complain at having 10 appearances and six starts

"We have nine academy products in our first-team squad at the moment and that not only bodes well for the club but highlights some of the fantastic work going on at Braidhurst by the coaches, scouts and other staff."

Leitch hopes to learn from the experience of fellow midfielders Keith Lasley and Paul Lawson next season.

"I've grown up supporting Motherwell and it's always been my dream to play for the club," he explained.

"The manager threw me in and, at my age, I can't complain at having 10 appearances and six starts.

"I want to build on that and continue playing well, hopefully achieving the success we had last year.

"There's a lot of competition for midfield places, but that's healthy and, still being young, I can learn a lot of the the likes of Keith and Paul and hopefully continue to develop myself as a player."