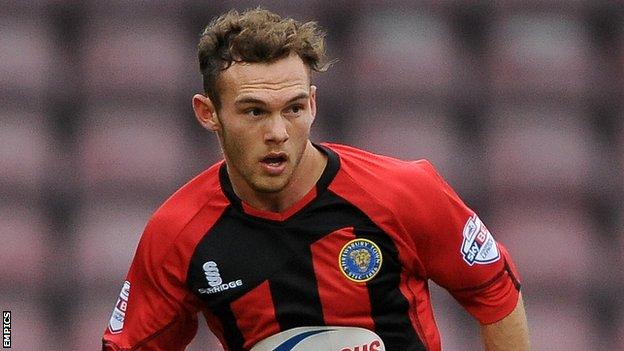 The 21-year-old has agreed a three-year deal at London Road and will now remain a League One player after suffering relegation with the Shrews.

He played 44 times last season and scored nine goals, including one against Posh in a 4-2 defeat in April.

"When I spoke to the manager there was only one team I wanted to join," he told BBC Radio Cambridgeshire.

"There were a few clubs interested. The gaffer here, Darren Ferguson, told me he would improve me as a player and showed me what he wants me to improve on.

"I've been at Shrewsbury for five years. I've been promoted, I've been relegated. I do love the club but it's definitely time for me to move on."

After coming through the Wigan youth ranks, Taylor joined Shrewsbury in 2009 and went on to make 144 appearances for the New Meadow side.

Posh chairman Darragh MacAnthony claimed on Twitter that other sides had tried to "hijack" the deal at the last moment.

He added: "Even when player was signing forms, other League One manager on phone offering 50% more wages to agent. Love a player who picks ambition over greed!"

Taylor said: "I've got an agent that thinks the same as me. I don't want to go straight to the Championship now and not play or maybe be fighting relegation again.

"This was definitely the best decision."