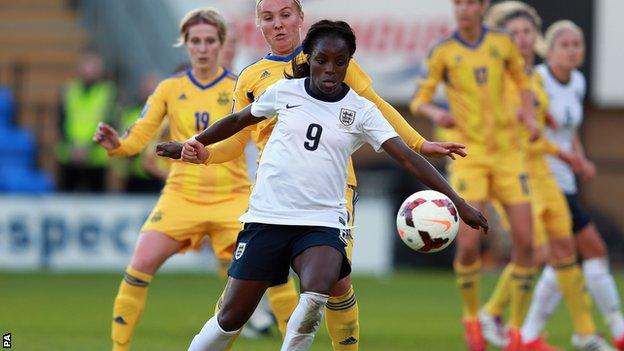 England head coach Mark Sampson says his players are not getting ahead of themselves despite knowing that wins in Belarus and Ukraine this month could clinch a place at the 2015 Women's World Cup finals in Canada.

The Group Six leaders face Belarus on Saturday and then Ukraine next Thursday.

"There will be no room for complacency," said Sampson.

"I'm confident the players will be focused on the job at hand."

England are aiming to do the double over the pair, having beaten Belarus 6-0 last September and Ukraine 4-0 just five weeks ago.

If six points are collected and second-place Wales fail to beat both Turkey and Belarus, England will go through.

Even if Wales get two wins, England victories would mean Sampson's team needed only one point from their final two games to qualify.

England boast a 100% record from their six qualifiers to date, but Sampson added: "We won't get ahead of ourselves, we'll just concentrate on maintaining the standards the team has set so far.

"It's pleasing how the players have taken on new ideas since I took over - that's been reflected in the performances and results.

"The challenge now is to keep improving and that will be the aim for the rest of the qualifying campaign, starting in Belarus on Saturday.

"We'll be expected to win there and again in Ukraine next week, but these are difficult places to travel to and we could be playing in intimidating environments."

Sampson has added one newcomer, Fran Kirby, to his squad in the wake of the 20-year-old striker's phenomenal form for Women's Super League side Reading.

Kirby has 11 goals in 10 league and cup games this season and the England coach said: "Fran's got great talent and she's a future big player for us."