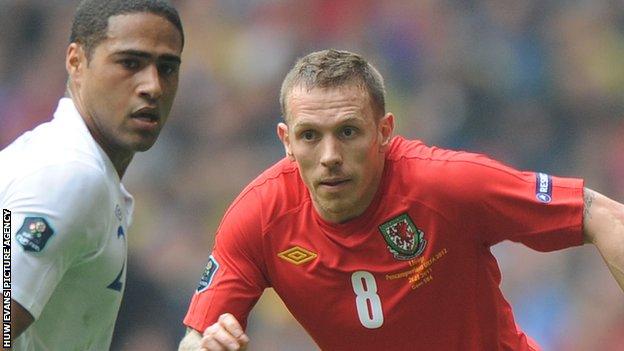 Former Wales captain Craig Bellamy should be given a job in his country's coaching set-up, according to Welsh football legend Cliff Jones.

Jones, a member of the 1958 Wales team that reached the quarter-finals of the World Cup, believes Bellamy has a lot to offer.

Bellamy, who won 78 caps for his country, retired in May.

"I'm just wondering if there could be some little job for Craig in the Welsh set up," said Jones.

He is one of my favourite footballers of all time

Bellamy, 34, played his final game in the Bluebirds' 2-1 Premier League defeat by Chelsea and retired from international football in October 2013.

He played for seven clubs in the Premier League, including Liverpool, Manchester City and Newcastle United, and said he will now prepare to move into management.

Bellamy has said previously that managing Wales is one of his ambitions.

Jones, who played 59 times for Wales, was in the Tottenham side that won the Football League and FA Cup double in the 1960-61 season.

He says Bellamy has a lot to offer Chris Coleman's team.

"I thought he was fantastic - Bellamy," said Jones.

"He is one of my favourite footballers of all time.

"He could be a bit of a loose canon at times, but he played for you as a winner.

"I know that he would relish it because he's a proud Welshman and I've got a lot of respect for him."