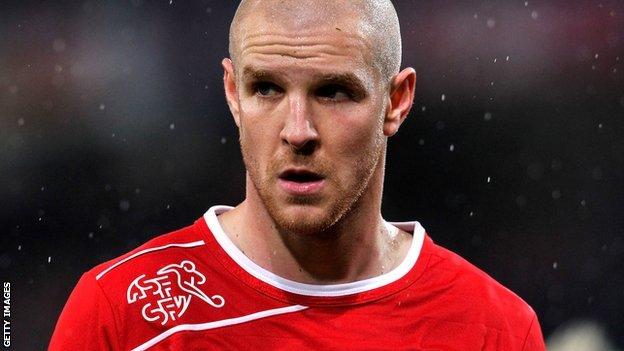 Senderos, 29, has agreed a two-year deal to become Villa's first senior signing of the summer.

"I'm really delighted to be joining Aston Villa, a great club with such a big history, and for me this is a great step in my career," he said.

Senderos is in the Switzerland squad for the World Cup and will compete in his third finals in Brazil.

He added: "This is a team and a club which wants to do better. I know this and hopefully we can all develop together and create something special.

"My goal is to help the team keep as many clean sheets as we can and to help drive Villa where we deserve to be and want to be."

Villa manager Paul Lambert said: "This will be Philippe's third World Cup finals and there aren't too many players who compete at that level over that stretch of time. He'll be a great addition to the group."

Geneva-born Senderos, who is 6ft 3in tall, scored four goals in 84 league appearances during his six years at Arsenal.

After loan spells with Everton and AC Milan, he left in 2010 to join Fulham where he stayed until January before moving to Valencia for the rest of the season.

Talks are expected to continue once 42-year-old Keane, number two to former Villa manager Martin O'Neill with the Republic of Ireland, returns from the United States where he is working with the Irish squad on tour.

Lambert has been looking for a new assistant since the departure of assistant manager Ian Culverhouse, which was confirmed by the club last week.