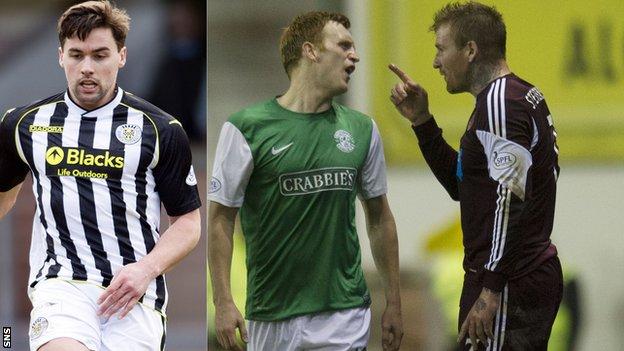 St Mirren are among the clubs interested in midfielders Liam Craig and Ryan Stevenson but could lose centre-half Darren McGregor to Rangers.

McGregor, 28, who joined the Buddies from Cowdenbeath in 2010, has had initial talks with Rangers but might yet accept a new deal in Paisley.

It is expected that the defender will decide on his future over the weekend.

Other clubs are also interested in Craig, 27, currently at Hibernian, and Stevenson, 29, who has exited Hearts.

Tommy Craig is attempting to re-build his squad after stepping up from assistant to take over from departed manager Danny Lennon at the end of last season.

His second spell at Tynecastle came to an end after new owner Ann Budge decided to re-structure the club following relegation from Scotland's top flight.

It is understood that Stevenson is likely to make a decision about his future by the end of this week.

Craig, who began his career with Falkirk before joining St Johnstone, was also the victim of a drop from the Scottish Premiership at the end of his first season at Easter Road.

Saints, Aberdeen and St Mirren have all expressed a tentative interest, but those have yet to materialise into a concrete offer.

Rangers manager Ally McCoist, meanwhile, is looking to create a squad capable of another promotion bid after winning League One.

As well as being interested in McGregor, the Ibrox club are hoping to complete the re-signing this week of Kenny Miller after the 34-year-old former Scotland striker left Vancouver Whitecaps.