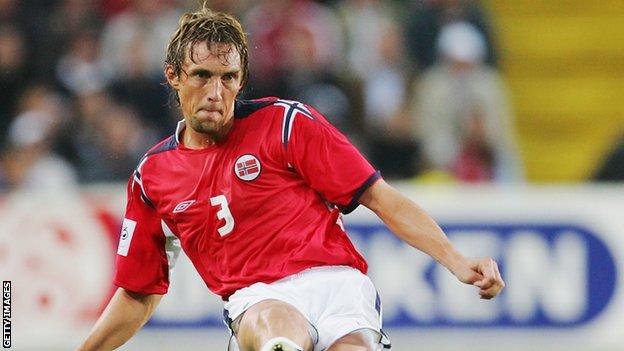 Deila, 38, is a leading candidate to take over from Neil Lennon, having won the title with Stromsgodset last year.

Riseth, 42, briefly played under Deila at the Norwegian side in 2009.

"If they are not playing, he will tell them why," said Riseth "If they don't work the way he wants them to, he will sell them. It's as simple as that."

When Riseth joined Stromsgodset on loan from Lillestrom in 2009, he was 38 and Deila was 33.

"Even though he was quite young at that point, he was really, really tough and wanted all the players to work hard on the training pitch and in matches," explained Riseth, who featured for Celtic between 1998 and 2000.

"He's tough but fair and always has a good relationship with the players.

"At Stromsgodset, they play in front of less than 10,000 supporters for every game, but I have seen him take his side to Rosenborg where there are 20,000 shouting at him and it never phases him.

"He is really strong in the head and that will help him if he goes to Celtic. The Celtic fans won't know much about him but in Norway, he is a big, big name.

"He won the league in Norway with Stromsgodset last year with just 10% of the budget that Rosenborg could spend.

"With the style of football he plays, he will soon make himself a hero to the Celtic supporters.

"If he can get the team to play the way he wants them, the club's potential will go sky high. He is the man to build the club's future."

And Riseth would expect an attacking style if Deila takes over Celtic.

"I've been over to see Celtic a lot over the last couple of years and they did well. But I think the fans will see a big difference in just how offensive the team will be if Ronny gets the job.

"He likes to get the full-backs pushing up and to get the ball moved up the pitch quickly. He will want the team to attack all the time.

"His team play a lot like Bayern Munich with the whole team joining in the attack.

"Right now, he is the best coach in Scandinavia."