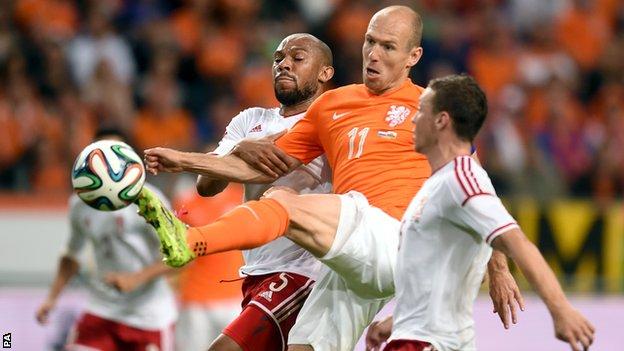 Wales manager Chris Coleman said his side put on a "great performance" in a 2-0 friendly defeat by Netherlands.

Without several senior players, including Gareth Bale and Aaron Ramsey, Wales produced an encouraging performance at the Amsterdam Arena.

"It was a huge performance from the team, a fantastic mentality," Coleman said. "Our lads were very brave."

George Williams is one of those young players that is fearless, so he's prepared to run at the opposition

The World Cup-bound Dutch led 1-0 at half-time through Arjen Robben, who stabbed in a rebound after Wayne Hennessey parried Robin van Persie's shot.

Robben then created the hosts' second goal, crossing for substitute Jeremain Lens to score from close range after being released by the excellent Wesley Sneijder.

"We're disappointed because we lost and the two goals we conceded were probably preventable," said Coleman, who described the atmosphere as "fantastic".

He added: "Our lads have had four training sessions in almost a month and were playing against a top team who have been together for two or three weeks, and this is their third friendly in that time.

"We did what we could - and could have got one or two goals ourselves. It was a great performance overall."

After coming off the bench, Williams slalomed through three Dutch defenders, and only a last-ditch tackle from Ron Vlaar stopped him from shooting.

"He's one of those young players that is fearless, so he's prepared to run at the opposition. He's confident and he's earned his performance tonight."

Coleman had hoped to hand a debut to Manchester United forward Tom Lawrence in Amsterdam, but the 20-year-old remained on the bench.

Coleman said: "We've got some good young players coming. James Chester was excellent at the back with Danny Gabbidon, but they can all be proud because I thought it was a great performance."

The Netherlands will face Spain, Australia and Chile in World Cup Group B.