Netherlands striker Robin van Persie has dismissed speculation he could be an injury concern ahead of the World Cup opener against Spain next week.

The Manchester United striker, 30, said he was withdrawn at half-time in the 2-0 win against Wales as a "precaution".

But he said: "I wouldn't call it an injury. It built up during the game so I decided it was sensible to come off."

Captain Van Persie, a scorer in his country's previous two friendlies, seemed to grimace as he walked down the tunnel during the break. 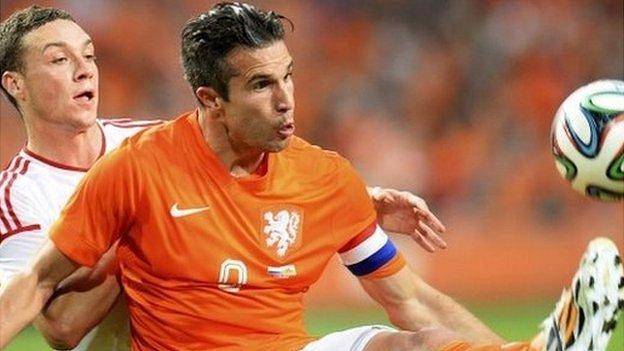 But asked whether the former Arsenal player would be fit for the Group B match against Spain on 13 June, manager Louis van Gaal said: "I hope so, and I think it is so."

Van Gaal, who will join his compatriot at Old Trafford after the World Cup, added: "He has a little injury and I think it is better that you don't risk a bigger injury playing the second half.

"I think he made the right decision. It is not an important match. You don't have to risk it."

The Netherlands were comfortable winners against Wales, with Arjen Robben and substitute Jeremain Lens scoring for the Dutch.

"I had expected that they would play with 10 men behind the ball. It is always difficult to score then, and they did it very well," said Van Gaal.