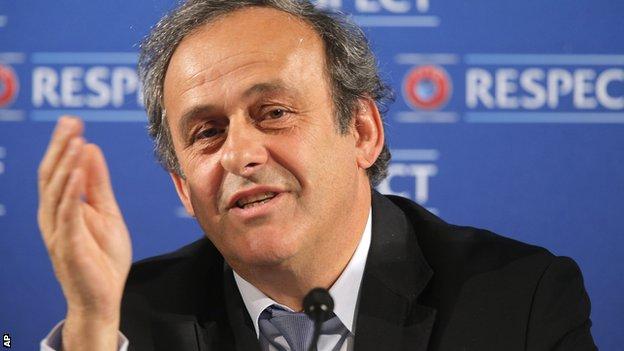 Uefa president Michel Platini has called for a re-vote on the staging of the 2022 World Cup if allegations of corruption against Qatar are proven.

The Qatar bid is under investigation after a Sunday Times report alleged football officials accepted bribes.

European governing body chief Platini voted for Qatar but told L'Equipe: "If corruption is proven, it will take a new vote and sanctions."

Qatar's 2022 bid committee has denied "all allegations of wrongdoing".

Asked about his decision to vote for Qatar when they were awarded the 2022 World Cup in 2010, Platini added: "I do not regret anything. I think it was the right choice for Fifa and world football."

The former France international captain, who has been Uefa president since 2007, will decide after this summer's World Cup in Brazil whether to contest the Fifa presidency in the election next May.

Current president Sepp Blatter, 78, head of world football's governing body since 1998, has indicated he will seek a fifth term in charge.